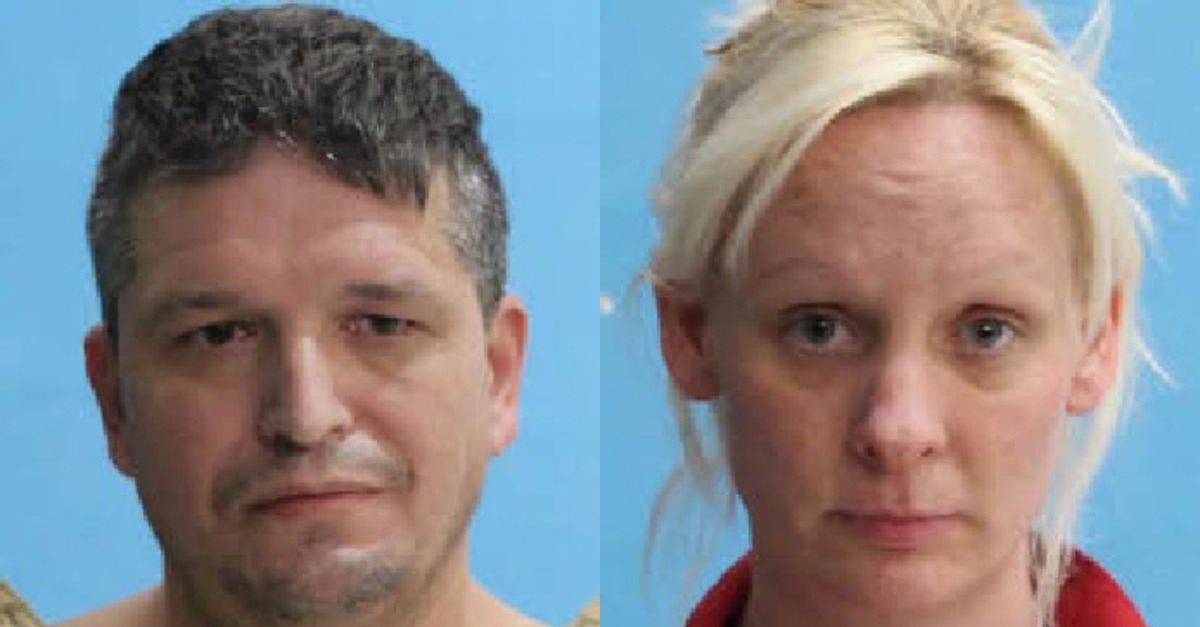 A Florida man and woman have been arrested in connection with a teenager who was allegedly found locked up inside of a shed.

Harry Richard Shoemaker, 44, and his girlfriend, Jennifer Ann Hines, 36, each stand accused of aggravated child abuse after officers with the Arcadia Police Department say they found a 14-year-old autistic boy locked inside of a 6 x 10 shed on the couple’s property.

Police arrived at the Shoemaker residence with an an investigator from the Sunshine State’s Department of Children and Families on Friday who led officers to the shed in question, according to radio station WFLA. When freed, the teenager said he had been inside the shed for a few hours. The boy also told authorities that he was kept confined inside the small hovel on regular occasions.

The circumstances of the child’s detention were even more grim.

“When talking to the victim, he explained to us, he was like ‘Hey did you see that bottle of water that was in there?’ We were like ‘Yeah, we [saw] it,'” APD Lieutenant Troy Carrillo told Fort Myers, Fla.-based NBC affiliate WBBH. “He was like, ‘I was saving that for the weekend because I knew that was the only thing I was going to drink that entire time.’ And we asked him, ‘Hey where do you use the restroom at?’ So on and so forth? He said ‘If I have to urinate, my dad makes me go in the yard. If I have to do something else, he makes me walk to the closest store to use the restroom.'”

According to local CBS affiliate WINK, police say that inside the shed they found a bed, all manner of trash, tools, a large bucket filled with what appeared to be human waste, snacks and canned food.

“[F]irst thing I saw was the bed that was in the shed. I noticed a lot of the wrappers from the food that was provided to the victim while he was caged in the shed,” Carillo told WINK on Tuesday.

Police quickly arrested Shoemaker and Hines soon thereafter. According to law enforcement, the boy told police that it was Hines’ idea to lock him up and that his father only reluctantly came around to the suggestion after much needling from the woman.

“When we talked to the dad,” Carrillo told WBBH, “he tried to justify what he was doing as far as it was his son’s fault because it was his behaviors and stuff that made him put him in the shed.”

The DCF began an investigation after a complaint from the boy’s grandmother, law enforcement said.

The shed is said to have been hot when officers arrived, completely lacking electricity or plumbing, with only a single window and vent–and only able to be locked or unlocked from the outside.

That prison-like shed existence, authorities say, wasn’t the only suggestion that Hines made regarding the autistic child.

“She [Hines] said she had no knowledge of anything going on and tried to distance herself from the situation. But when we spoke to the victim, he told us what her part was,” Carillo told WBBH.

“I believe, talking to the resource officer, earlier in the day they, I believe it was the father’s girlfriend who tried to withdraw him from school,” Carillo told WINK. The officer also described how the boy responded when he learned about the arrests: “I believe his exact words were, ‘Oh thank God I don’t have to go back to that shed again.’”

Authorities have not yet made public what the motive for the alleged child abuse is believed to have been.

Shoemaker and Hines are currently detained in the DeSoto County Jail on a $75,000 bond.