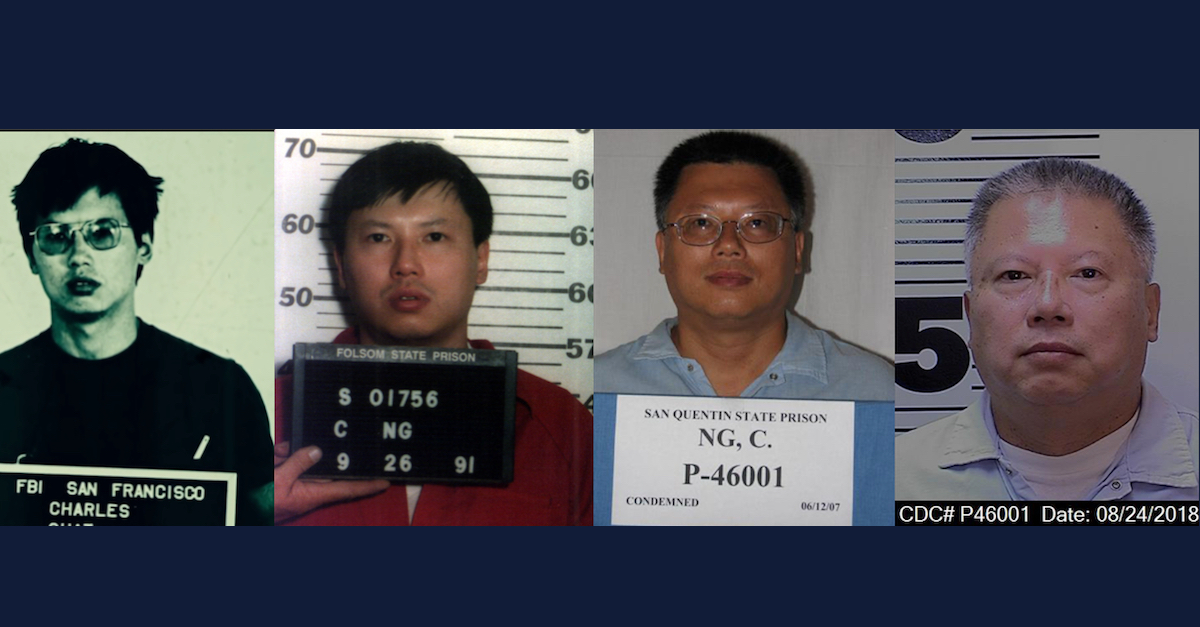 Serial killer Charles Ng is pictured in the 1980s, 1991, 2007 and 2018. (screenshot from World’s Most Evil Killers on YouTube, photos from California Department of Corrections and Rehabilitation.)

The California Supreme Court has upheld the death sentence of a serial killer who kidnapped and sexually tortured his victims while filming them in a remote cabin, rejecting his argument that an electric stun belt forcibly strapped to him during trial violated his rights.

Charles Chitat Ng, 61, was convicted of murdering 11 people in a kidnapping spree from 1984 to ’85 that terrorized northern California, but authorities have said he and his cohort, Leonard Lake, may be responsible for more killings based on human remains found at a cabin that Lake owned that doubled as a doomsday dungeon.

Lake, described as a survivalist who feared a nuclear holocaust, committed suicide by eating cyanide pills shortly after his arrest on a gun charge in 1985. Ng fled to Canada but was arrested for shoplifting, then returned to the United States in 1991 after a lengthy extradition proceeding.

A jury in Orange County returned a death sentence against him in 1999 after eight years of legal wrangling that included a judge granting his request to represent himself, then revoking it after repeated interruptions. A unanimous opinion Thursday by the California Supreme Court affirms that sentence.

Ng’s end-of-the-line effort to persuade the state’s highest court to vacate his death sentence focused on that revocation, as well a jail informant’s testimony about sadistic cartoons Ng drew of his crimes, Ng’s conflicts with his standby counsel and the requirement that he wear an electric belt while in the courtroom.

Based in San Francisco, Burt represented Ng in extradition proceedings between 1988 and 1991 and didn’t work on his criminal case. But as chronicled in Thursday’s 178-page opinion, he apparently left such an impression that Ng refused to work with his public defenders in Orange County years later, instead demanding Burt’s appointment.

Some questioned whether it was another delay tactic by Ng, who’d become well known for them. But, as quoted in the opinion, a judge in 1998 said Ng’s feelings seemed to be so strongly held that he did not simply mistrust his current counsel, “he mistrusted anyone who was not Burt.”

Burt offered to join the case in late 1997 but later backed out after the court offered him only a set salary when he wanted hourly compensation, according to the opinion. Two months later, he offered to replace Orange County assistant public defender William Kelley as lead counsel but said he couldn’t be ready for the scheduled September 1998 trial, which a judge said wasn’t going to cut it.

Thursday’s opinion concludes the judge was well within bounds to reject Burt’s appointment.

“The trial court was not obligated to provide Burt with more time, and defendant does not cite any law suggesting otherwise,” according to Wednesday’s opinion.

Reached by phone on Friday, Burt declined to comment on the ruling, saying he didn’t know of it. Ng’s lawyer in trial, Kelley died last year, with his representation of Ng the only case mentioned in his obituary.

A native of Hong Kong, Ng had family there and in Canada as he awaited trial, but Kelley told the judge “he was struggling to find penalty phase evidence to evoke sympathy and noted that defendant’s family was not cooperating,” according to Thursday’s opinion.

Ng was represented in the appeal by Eric S. Multhaup, an attorney in Mill Valley, California, who couldn’t be reached for comment on Friday.

Part of Multhaup’s appeal argued that physically restraining Ng in trial violated his right to due process, but Supreme Court justices said they were necessary and detailed the litigation surrounding them, including an argument by Kelley that Ng’s stun belt was “causing him some pretty grave discomfort” and “cutting into his waist,” according to the ruing.

Prosecutors said the belt wasn’t because of any feared outbursts by Ng but because of the risk that he might try to escape, mentioning that he’d pulled a gun on security guards when arrested for shoplifting in Canada.

“We need not parse every reason relied on by the prosecutor and the trial court to justify restraints because there is enough evidence in the record to support the court’s finding of a manifest need for restraints,” according to the opinion. “Ample evidence showed that defendant had a history of escape or attempted escape.”

The opinion also endorsed the use of jail informant Maurice Laberge, who met Ng when they were imprisoned in Canada. Laberge testified in his extradition hearing about Ng’s statements about a video he worried authorities would find that showed two women “whom he and Lake had kept in a cell for some time.”

“Defendant described scenes from the video to Laberge. He also shared cartoons depicting scenes from the video, some in graphic detail,” according to the opinion, which was written by Justice Joshua Groban. Ng also described his involvement in some of the murders to Laberge, including saying he’d killed one woman because she tried to break out of her cell.

“He said that he put his gun inside her vagina and made her call Safeway to ask for time off,” the opinion states, describing what Ng told Labarge.

The court said Labarge’s testimony was appropriate, but added that even if it weren’t, “the overwhelming evidence of guilt” would have made it a harmless error.

Read the full opinion, below.

(Image: screenshot from World’s Most Evil Killers on YouTube, photos from California Department of Corrections and Rehabilitation)