‘Breaks My Heart’: LGBTQ Center Vandalized in Florida. Police Investigating This as a Hate Crime Because of Notes Left Behind. 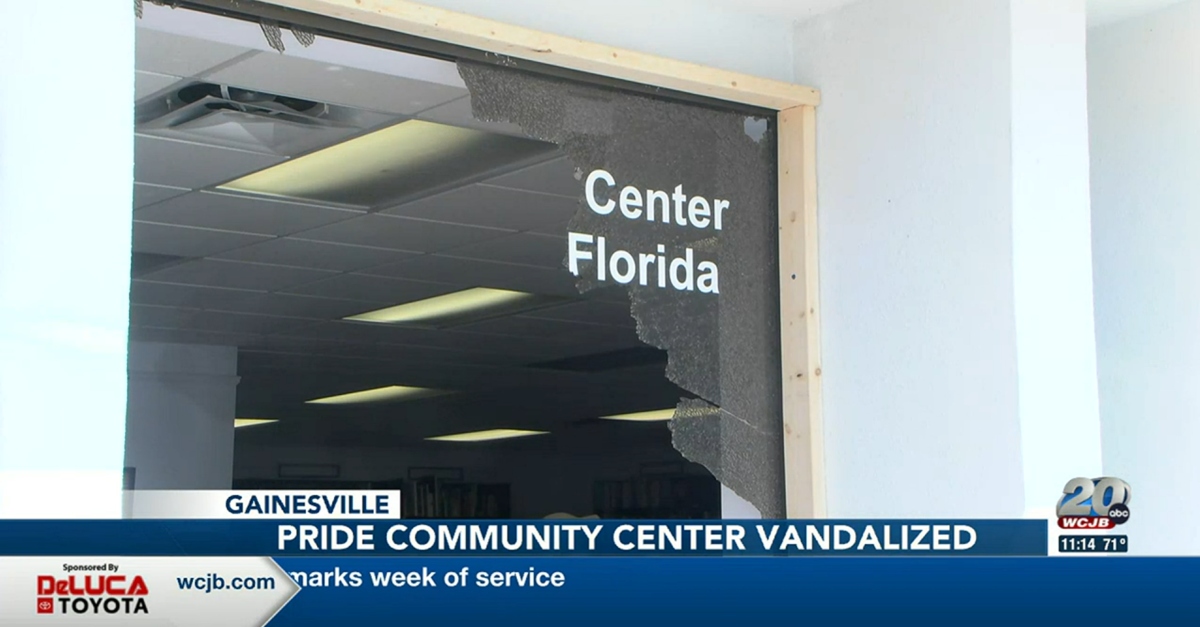 Members of an LGBTQ community center in Gainesville, Florida, are “heartbroken” after someone vandalized their office, smashing windows including on a door. Citing the contents of writing left behind, they said cops are investigating this as a hate crime, according to WCJB.

“It looked like they used rocks to break the windows,” vice president James Brown of the Pride Community Center of North Central Florida told the outlet. “We don’t know for sure. The police are investigating. That’s going to be their job to figure out. The reason it’s being investigated as a hate crime is because of the notes that were left.”

Members reportedly declined to reveal the contents of these notes because of the ongoing investigation.

Board member Debbie Lewis said a nearby real estate office called them Saturday morning about their building being vandalized.

“She told me that she was just informed by somebody that came to her office that the pride center had been vandalized and that the windows were all smashed,” Lewis told the outlet.

“Earlier today, and in the pit of my stomach right now, it’s heartbreaking to see a building that we pour so much love and energy into be vandalized by people that were obviously targeting us because of the work we do here,” Brown said.

“When I came here and saw everything, it was hard,” Lewis said. “I got very emotional because it was hard to see.”

“On Saturday, 9/24/22 at approx. 1000hrs GPD was dispatched to the Pride Community Center (3131 NW 13th St),” Gainesville police said in a statement obtained by Law&Crime. “An unknown suspect(s) threw rocks through the front windows- that displayed pride flags. A note was also left at the door making reference to an upcoming advertised event. The investigation is continuing. We urge the community to report any suspicious activity. Neighbors in the area are asked to check video surveillance or report if they witnessed the incident that possibly occurred between 1600hrs on 09/23/22 and 0900hrs on 09/24/22. We have asked our officers to increase their patrols in the area.”

Locals helped board up the windows. People swept up glass and rocks, according to The Gainesville Sun. The group accepts online donations here.

“When something like this happens, you find out who your friends are, and we got some great people who showed up today,” Lewis told WCJB.

“Our Pride Center is a place where our community can come and be safe and feel welcomed,” Brown told the Sun. “Seeing the center vandalized in this way breaks my heart. This incident is exactly the reason why our community needs safe spaces. Your board at this Pride Center will keep working hard and pouring our love into this community and on making this a safe space again.”

“We are heartbroken but undeterred,” organization president Tamara Perry-Lunardo told the outlet. “The Pride Community Center of North Central Florida remains committed to being a safe place, and this display of hatred has only strengthened our resolve to continue to show up with love for our beautiful LGBTQ+ community. We’re here, we’re queer—loud and proud.”

“Later I will be angry about this vicious hate crime but right now I’m incredibly sad for every vulnerable person in my community,” she said. “This does not represent the values of our community and we can’t be defined or stopped by the hate-filled actions of ignorant people.”

Note: We added a statement from Gainesville police.