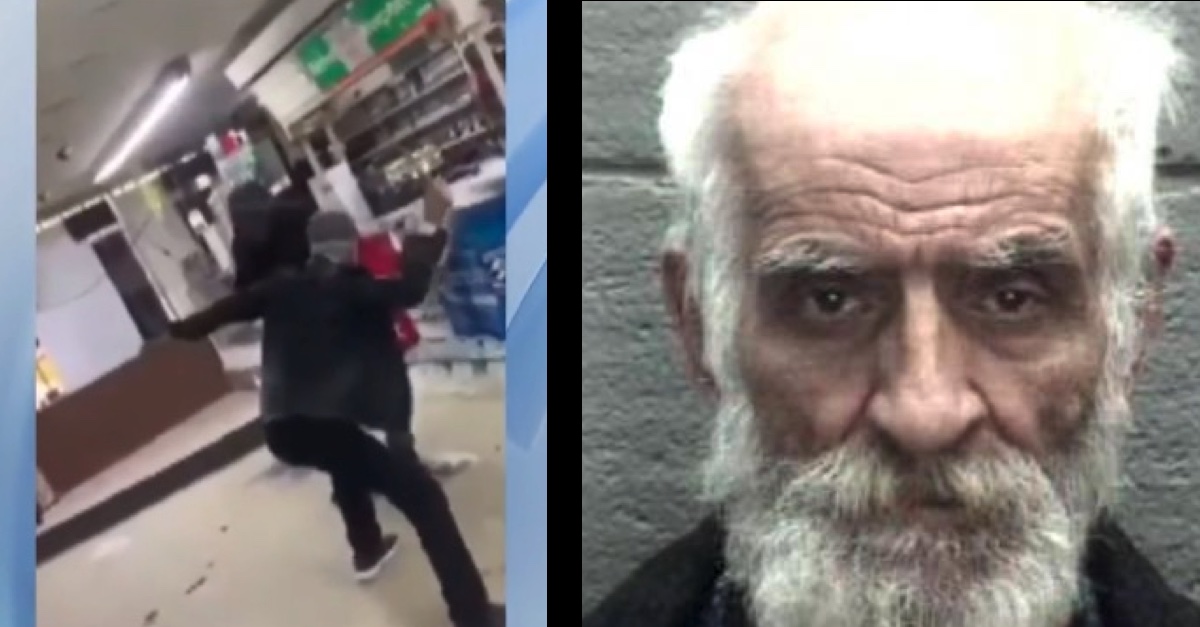 A convenience store clerk in North Carolina has been arrested after a local news station sent police video of the clerk apparently beating a customer with a stick as the customer was having a seizure.

Gregory Evans, 56, had to be hospitalized after being beaten by Sobhi Hassan, 68, inside the Princess Market in Rocky Mount, according to a report by local NBC affiliate WRAL.

Evans’s family members told WRAL that Evans started having a seizure while he was inside the store at around 3:30 p.m. on Dec. 22. He was then confronted by the clerk, who is seen on video hitting Evans with a stick as Evans is heard groaning in apparent pain.

“Get out,” the man with the stick says repeatedly as he strikes Evans’s legs. “Get out, motherfucker!”

The man continues the attack as Evans appears to lean on the checkout counter for support.

“Police were able to arrest the employee after WRAL News sent the police a copy of the video this week to ask if any charges would be filed,” WRAL reported Wednesday.

Hassan was arrested Tuesday by the Rocky Mount Police Department and charged with simple assault, the WRAL report said.

Community members in Rocky Mount have been protesting since the video surfaced, calling for Princess Market to be shut down, according to WRAL.

Demonstrators told WRAL that they felt the Princess Market had behaved in “a negative and discriminatory way” toward their community for years, and that the video was the breaking point.

A community forum was held at the Ebenezer Baptist Church on Monday, where the victim’s sister, Edith Cooper, gave an update on Evans’s condition.

“He’s a little slow, and he still doesn’t have full mobility of his body at this time,” Cooper said, according to WRAL. “But he’s okay.”

Cooper said that her brother was still undergoing tests for possible long-term injuries at the hospital, and that the assault has had a terrible impact on her and her family, WRAL reported.

Rocky Mount Police Chief Robert Hassell was also at the gathering, according to a report in the Rocky Mount Telegram.

Hassell said the video was brought to his attention just past 8 p.m. Dec. 22 after the video was sent to the police department’s public information officer by Raleigh television station WRAL, the Telegram reported.

Hassell also told the people at the forum that he was shocked by the content of the video, and that the police department was investigating the incident.

“Give the police department and our District Attorney’s Office a chance to do what we are hired to do,” Hassell said, according to the Telegram report.

“I only ask the community: Please remain calm and let the police department conclude this investigation — and we will take the necessary actions that needs to be taken, in lockstep with our District Attorney’s Office, to make sure that we have a solid case if there is one to be brought,” he added, according to the Telegram.

WRAL asked Elizabeth Hedrick, who owns the building where the Princess Market leases space, whether she planned to stop renting to Hassan’s family or shut Princess Market down entirely. She told WRAL that she hadn’t spoken with the family since seeing the video, and that it was too soon to know what her next steps would be.

A man close to the family, who was outside of the store on Wednesday afternoon, told WRAL what Hassan did was “very stupid.”

You can watch the video here.