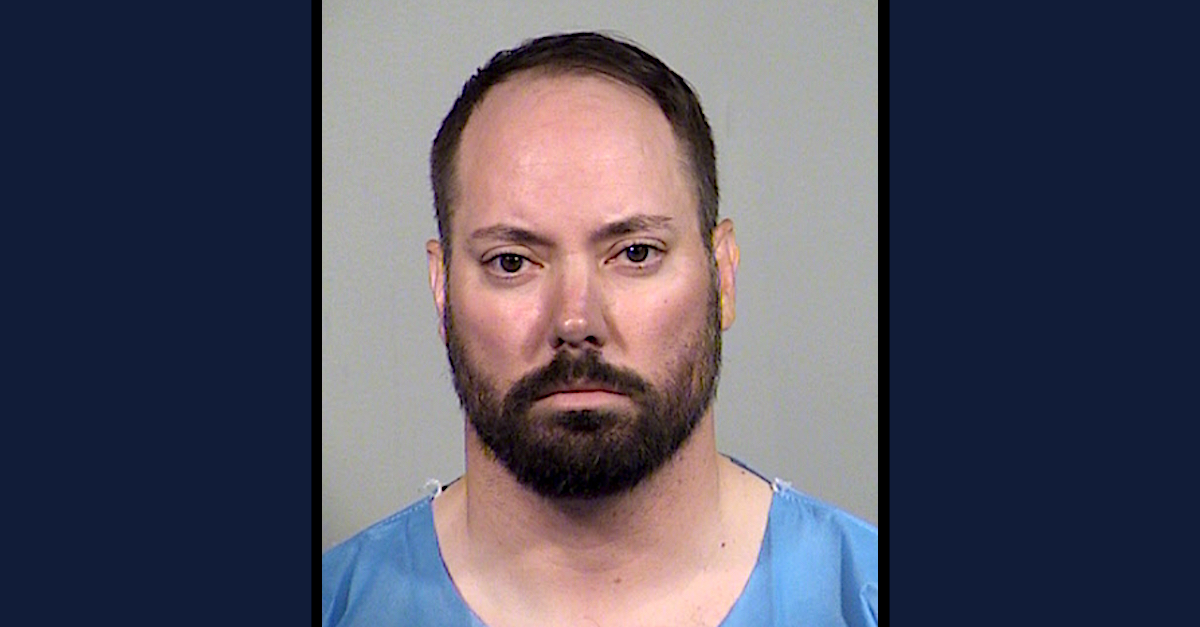 An Arizona man allegedly told police he shot and killed his wife over the weekend after she startled him in the middle of the night.

Christopher Hoopes, 36, stands accused of murder in the second degree and unlawful discharge of a weapon over the death of 25-year-old Colleen Hoopes, according to the Tempe Police Department.

In a press release, police say the shooter called 911 and admitted to the incident. During that call, Christopher Hoopes allegedly said he was startled by his wife in the middle of the night and shot her.

Officers responded to the scene around 3:45 a.m. on the night in question. Colleen Hoopes was taken to a nearby hospital but succumbed to her injuries. She was determined to be dead by 4:10 a.m.

According to Phoenix FOX affiliate KSAZ, investigators believe the deceased woman was shot twice with a 9mm handgun. The husband allegedly dialed 911 dispatch four minutes after the shooting.

He was booked on $750,000 bond. The TV station reports the defendant reportedly made bond and was subsequently released.

Deb Buckley and Ed Buckley are the victim’s parents. In an interview with KSAZ, they mourned their forever gone daughter and reflected upon her singular goal in life — expressed since she was very young.

Deb Buckley recalled: “From the time she was two-and-a-half, she said, ‘I want to be a ballerina,’ and I said, ‘We don’t have money for dance lessons. We can’t take dance lessons until you’re four,’ and she kept saying, ‘Am I four yet, am I four yet?’”

And that dream was eventually realized.

The Rochester, N.Y. native graduated with a degree in professional ballet training from the Draper Center for Dance Education in the Empire State. She also attended Indiana University’s Jacobs School of Music. Colleen Hoopes would later move to the Grand Canyon State where she joined Ballet Arizona in 2017.

There, she danced in numerous performances, including “Swan Lake,” “Sleeping Beauty,” “The Nutcracker,” and “Cinderella.”  Her career — and even her marriage — were documented on social media.

In honor of our company members returning to the studios next Monday, this week we will be sharing some of the exciting moments the dancers had over the past few months! At the end of July, Colleen Buckley became Colleen Hoopes. Congratulations Colleen and Christopher!❤️💍 pic.twitter.com/y75eds1GWG

“We are heartbroken to learn of the passing of Company Dancer, Colleen Hoopes. Colleen was an integral part of the Ballet Arizona family and will be missed deeply. She was passionate and dedicated to her artform and a bright light to us all. Our hearts go out to her loved ones.” pic.twitter.com/6LXn3ssoUE

Condolences from those who knew her best poured in.

“We are heartbroken to learn of the passing of Company Dancer Colleen Hoopes,” Ballet Arizona said in a statement provided to The Arizona Republic. “Colleen was an integral part of the Ballet Arizona family and will be missed deeply. She was passionate and dedicated to her art form and a bright light to us all. Our hearts go out to her loved ones.”

The IU Jacobs School of Music Ballet Department released a statement about the alum via Facebook:

We mourn the tragic loss of IUBT alumna Colleen (Buckley) Hoopes. Colleen graduated in 2017 with a Bachelor of Science in Ballet and an Outside Field in Political Science. She went on to dance at Rochester City Ballet and then at Ballet Arizona. She shone a bright light at IUBT, pouring kindness and passion into her dancing and life alike. Our faculty and alumni grieve her passing and send our love, support, and condolences to her family and friends.

Her parents, Deb and Ed Buckley hope to found a ballet scholarship in her name. Updates to follow.

“She always been a true light in our lives,” her father told KSAZ. “It’s sad. This is all very sad.”

[Image of Christopher Hoopes via the Tempe Police Department; image of Colleen Hoopes via a handout from the IU Jacobs School of Music Ballet Department]