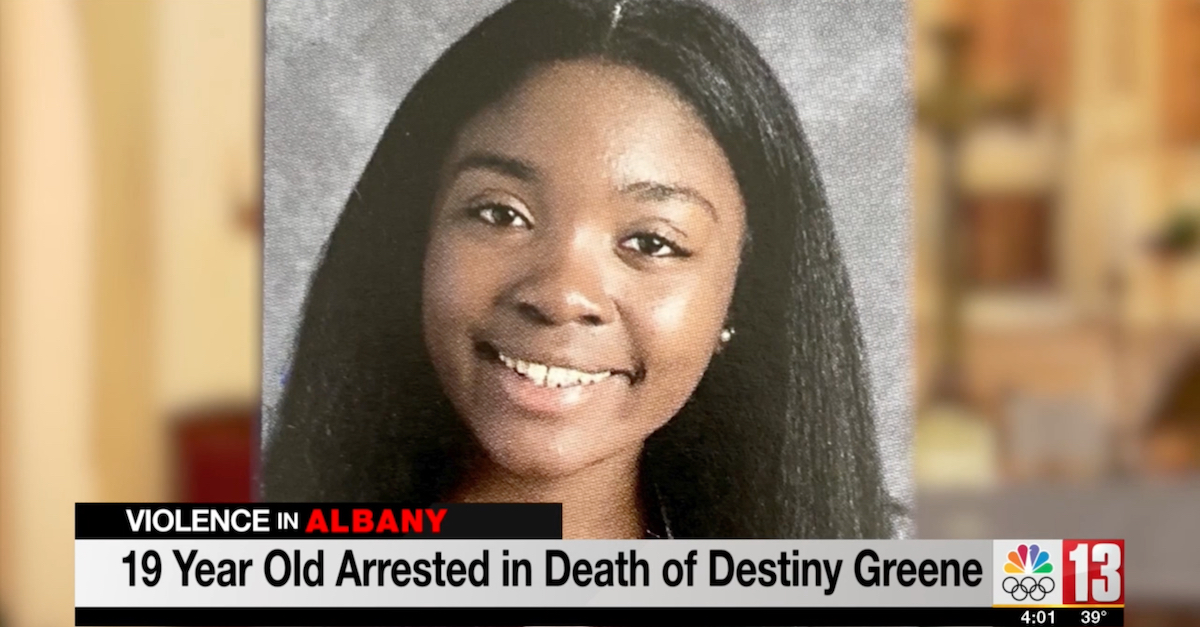 Destiny Greene appears in a photo obtained by WNYT-TV.

An upstate New York teenager has been arrested and charged in connection with the alleged murder of an honor roll student at a nearby high school.

The Albany Police Department on Wednesday said that Branden Rivera, 19, had been charged with shooting and killing Destiny Greene, 15, of Latham, N.Y. on Monday, May 24, 2021.  The evening shooting occurred on Wilbur Street just east of Philip Street in the Empire State’s capital city.

Officers responded to a report of gunshots at the scene at about 9:25 p.m. on the aforementioned date last spring.  Shortly later, staff at the nearby Albany Medical Center said Greene was at the emergency room “with a gunshot wound to the torso,” according to police.  She had apparently been transported there by private vehicle.

Greene died at the hospital.

Police later determined that the shooting occurred during a robbery, the department alleged on Facebook.

A bench warrant for Rivera’s arrest was issued by an Albany City Criminal Court judge in August 2021.  That warrant listed charges of Fifth-Degree Criminal Possession of Stolen Property, the police said.

Rivera is also charged with one count of first-degree murder, the police continued.  He was arraigned Wednesday morning in Albany City Criminal Court and taken to the Albany County Jail.

The Albany Times-Union noted that the more serious murder charge carries a possible maximum sentence of life in prison.

The newspaper said that a group of men opened fire on a car containing the victim and three other friends.  The other occupants of the vehicle were “two adults and another minor,” according to the T-U; authorities said the group was in the area to finalize the sale of an item “initiated on Facebook Marketplace.”

The victim was a tenth-grade honor roll student at Latham’s Shaker High School.  She was hoping to become a nurse aesthetician, according to the newspaper.  Friends and family described her as “a generous, fun-loving friend, daughter, and student who had a way of brightening the lives of those around her,” the Times-Union said.

Last summer, Greene’s family asked the community to honor the victim’s unfulfilled 16th birthday by providing tips to the police or to area clergy about what led to the shooting.  Greene died a few weeks short of that birthday, Schenectady/Albany/Troy CBS affiliate WRGB reported.

“She was so looking forward to her Sweet 16,” Elijahnae Greene, the victim’s sister, told the television station. “She was going to have three different outfits. We were going to do a photo shoot, and it’s just like — I’m still going to hold those promises up to her, and I’m going to do it big, but I just need someone — anyone — to come out tell the truth, give me my family the closure we need.”

“And you know, Black Lives Matter,” she continued, according to WRGB’s report. “I stand with that statement, but we need to make it towards each other now because we do it to each other, it’s not just the police. And it starts within our community.”

The victim’s brother echoed similar sentiments at a memorial service at Shaker High.

“I was so proud of her,” said Isaiah Greene. “I love her so much, and I always will. And I will never forget her… and I saw her as the best little sister I could have ever asked for.”

“The minute you started speaking to Destiny, she just had this engaging personality,” Principal Richard Murphy told Spectrum News, a local cable channel.

Chloe Clark, a basketball coach, said Greene was “excited… about everything” and was a natural leader on the court.

“When we would play games in practice,” Clark said of Greene, “everyone would get behind her.”

“I got to watch her become a confident young woman, and she was thrilled about her future,” she said.

A court docket for Rivera’s criminal case is not available on an Albany City Criminal Court website.