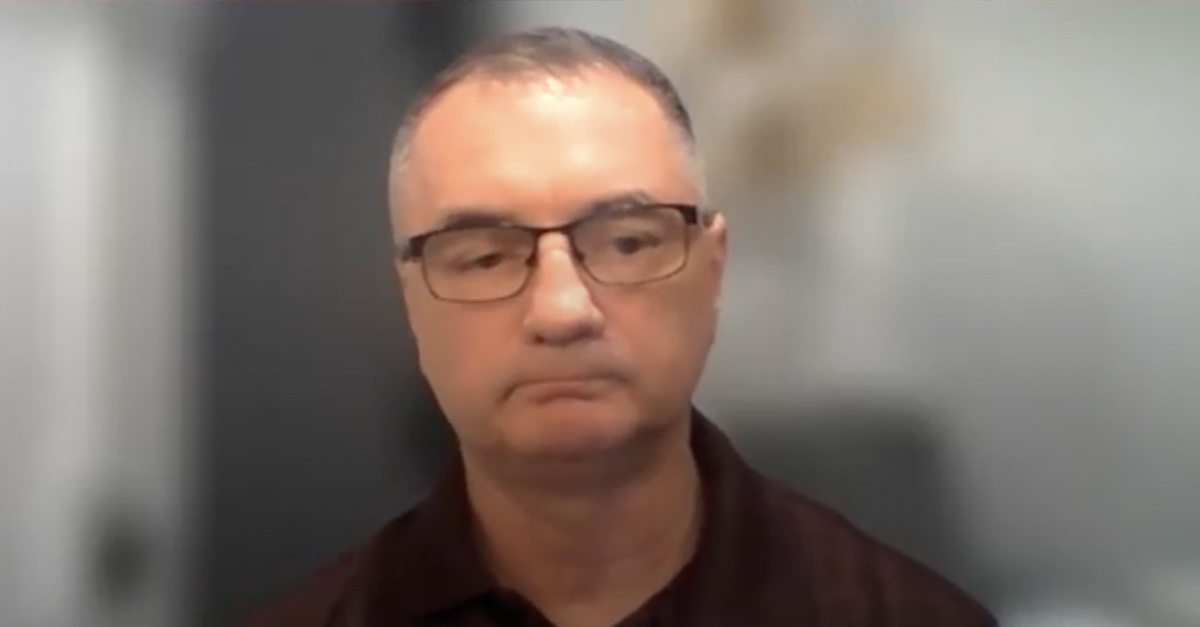 Randy Gene Kaufman, who identified himself as a former prison supervisor, was charged earlier this month with one count of public sexual indecency – contact, court records reviewed by Law&Crime show.

According to a probable cause affidavit obtained by Law&Crime, an officer with the Maricopa County Colleges Police Department at approximately 4:29 p.m. on Oct. 4 was performing his normal patrol routine when he observed a maroon Ford F150 pickup truck just inside of a parking lot at Rio Salado College in Surprise, Arizona. The officer said he noticed that the vehicle was parked across three spaces and there was a shade screen across the inside of the front windshield, which he noted as unusual.

Approximately 10 minutes later, the officer went to take a closer look at the vehicle and noticed that it was still running. He allegedly approached the vehicle from the front passenger door side and observed Kaufman in the driver’s seat, noting that he appeared to be using one of his hands to hold up a cell phone.

“I immediately became alarmed as I saw [Kaufman] had his pants down mid-thigh and was exposed showing his fully erect nude penis. [Kaufman] was manipulating his genitals in a masturbatory manor,” the affidavit states. “[Kaufman] was engrossed in his activity and did not see me at the passenger side door. I was further alarmed as I saw a subject on a bicycle pedaling east approximately 8 feet by [Kaufman’s] driver’s side.”

What particularly seemed to disturb the officer — and what could result in Kaufman being charged with a felony — was Kaufman’s alleged proximity to young children.

“I looked southwest approximately 190 feet with a full view of the Wirtzie’s Preschool and Child Care Center (directly south and next to RSC Surprise) and saw several preschool age children having outdoor activities in the playground,” the officer wrote. “Vehicles were entering and exiting the east drive of the lot passing [Kaufman’s] vehicle from approximately 6 to 8 feet from the passenger side of the Ford.”

When the officer approached the driver’s side door, Kaufman allegedly seemed “alarmed and surprised” then grabbed a cloth from the seat and “covered his genitals.”

“[Kaufman] rolled down his window and I instructed him to pull his pants up. I had [Kaufman] exit the Ford truck. I said to [Kaufman]; ‘Seriously?'” the affidavit states. “[Kaufman] said to me ‘I’m sorry.’ [Kaufman] spontaneously said to me, ‘I fucked up. I’m really stressed.'”

An excerpt from the affidavit shows a portion of the alleged conversation.

Officer: “I saw you had your phone out while you were doing what you were. What was going on with the phone?”

Officer: “When you look around here what do you see?”

[Kaufman]: “The child center but I didn’t notice it until you came up and I got out of my truck. Are you going to put that in a report?”

Officer: “Don’t you see how alarming that is? That there are children nearby, people passing on bikes and In cars where they can look and see what you are doing?”

The documents say Kaufman attempted to get the officer to go “off the record.” He then said he knew another officer on the force, that he was running for the aforementioned board, and that he claimed he didn’t know the area was “one of your sites” — e.g., one of the college’s sites.

Kaufman also told the officer who allegedly caught him in the act that he was a retired Department of Corrections supervisor who worked at “Florence, Eyman and Lewis,” the court paperwork states. Those three locations are all various Arizona State Prison complexes.

According to what appears to be the defendant’s Facebook page (given the user’s name and expressed candidacy for the college board noted above), Kaufman is an avid Donald Trump supporter who has opposed vaccine mandates, mask mandates, and has supported trucker convoys and “election integrity.”

The page also railed against the “baby killing leftists,” though the author placed punctuation marks within the word “killing” in an apparent attempt not to be flagged by the system.

In a series of posts, the author attempted to spur counter-protests at a pro-choice rally and championed anti-abortion legal maneuvers in his state.

“I feel bad for all those doctors and nurses who have been making their living killing babies, I mean providing abortion care,” one post reads.  I guess now they’ll have to get jobs that uphold their oath to ‘abstain from all intentional wrong-doing and harm.'”

Below is a candidate town hall forum with Kaufman.

He said he was “activated” to join politics by Covid-19, social unrest, and social media.