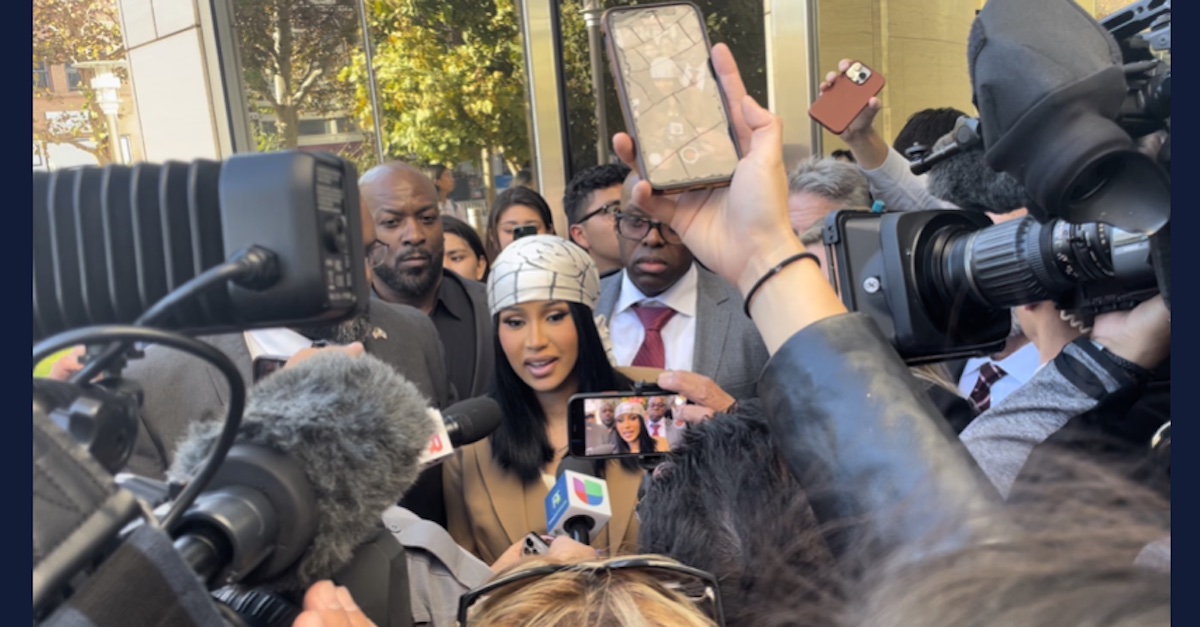 Cardi B speaks with reporters and fans outside the federal courthouse in Santa Ana, California, on Friday, Oct. 21, 2022. Timm Gooden, who designed the cover to Gangsta Bitch Music, Vol. 1. is behind her on the left while her former manager Klenord “Shaft” Raphael is on the right.  (Photo: Meghann M. Cuniff/Law&Crime)

Attorneys who lost a jury trial against rapper Cardi B aren’t giving up on their lawsuit. A new motion asks a judge to reject the verdict and rule in favor of a man whose back tattoo is partially featured on the cover of her mixtape Gangsta Bitch Music, Vol. 1.

Federal jurors on Oct. 21 rejected Kevin Michael Brophy‘s claims that Cardi and two companies misappropriated his likeness by using a portion of Brophy’s distinct tattoo on the mixtape cover, photoshopped on the back of a man who appears to be performing oral sex on Cardi as she drinks from a bottle of Corona.

Cardi’s lawyers filed a proposed judgment on Nov. 9, which is standard for the winning side in a civil trial, and it seeks to have Brophy pay for Cardi’s attorney fees and costs. But Brophy’s lawyers said the judgment is “premature” in part because the judge who presided over the trial hasn’t addressed their request for an injunction to stop the distribution of the mixtape with Brophy’s tattoo.

Cardi’s lawyers replied by saying an injunction isn’t warranted because injunctions “are remedies for wrongs or threatened wrongs and the Jury concluded that Plaintiff failed to prove any wrong occurred.”

“It is axiomatic that the Court cannot enjoin conduct that the Jury has concluded is no violation of Plaintiff’s rights,” according to the two-page response from Jonathan Segal, a partner at Davis Wright Tremaine LLP in Los Angeles.

Defense attorneys nearly always ask to dismiss lawsuits under Rule 50 after their opposing plaintiff attorneys present their case, arguing the evidence is too obviously inadequate to support allowing the jury to move forward. Plaintiff attorneys can bring Rule 50 motions, too, and Brophy’s lawyers argue they are well within there rights to bring theirs six weeks after trial because Carney said in a pre-trial conference he wouldn’t be considering any such motions until after trial.

“These discussions included a clear stipulation by Plaintiff’s counsel to this procedure, and culminated in an on- the-record statement by Defendants’ counsel at the final pre-trial conference that there would be no waiver for failure to make a Rule 50 motion,” according to the 22-page motion from Lawrence J. Conlan of Cappello & Noël LLP. “These pre-trial discussions, and counsel’s conduct in conformance with that understanding, preserved Plaintiff’s right to file a Rule 50 motion.”

Brophy sued Cardi, whose legal name is Belcalis Almanzar, not for copyright infringement but for likeness misappropriation, alleging the presence of a portion of his tattoo on the mixtape cover amounts to his personal likeness being used without his permission.

But the judge emphasized the image here is really kinda tame.

From the complaint: “The cover of Gangsta Bitch is designed to attract consumers to the Cardi B edgy persona…” pic.twitter.com/x7McnJKQ9E

The lawsuit sought at least $5 million when it was filed in 2017, and Conlan gave jurors a range of damages options during his closing argument while also urging them to order punitive damages. The jury deliberated about 90 minutes before rejecting all claims.

Cardi’s legal team includes Peter Anderson of Davis Wright Tremaine, a veteran copyright and First Amendment lawyer who secured Led Zeppelin’s historic win at the 9th Circuit Court of Appeals in 2020 over a copyright claim related to the classic “Stairway to Heaven.”

Anderson handled most of the trial, emphasizing to jurors that Brophy has no ownership or copyright stake in his tattoo, and that the use of Brophy’s tattoo on Gangsta Bitch Music, Vol. 1 cover is protected under the First Amendment’s protections for transformative art.

Timm Gooden, who designed the 2016 cover, testified about using Photoshop to merge part of Brophy’s tattoo with a photo of Cardi sitting in the back seat of a car with a male model. Brophy’s tattoo was placed on the model’s back, but the final album cover includes the model’s own hair and a slightly darker skin tone than Brophy’s.

Conlan emphasized in his motion that Cardi’s lawyers didn’t try to argue Gooden “was acting outside the scope of his authority, nor could they.”

“Crucially, through a wealth of trial testimony and exhibits admitted into evidence, Plaintiff established that Defendants knew they were using Plaintiff’s likeness to advertise their mixtape, whether through actual knowledge or constructive knowledge of their agents,” according to Conlan’s brief.

In addition to seeking a judgment in his favor under Rule 50, Conlan said he may pursue another motion for a new trial because of “the jury’s verdict being against the clear weight of evidence.”

Conlan also cites Judge Carney prohibiting Conlan and his co-counsel, Barry Cappello, from discussing a defamation lawsuit Cardi filed in Atlanta federal court against YouTuber Tasha Kebe, which led to a $4 million judgment in Cardi’s favor after she won the jury trial.

Cappello told the judge he wanted to question Cardi about the emotional harm she and a psychologist said Tasha’s defamatory statements caused her, to try to draw comparisons between Brophy’s claims that Cardi’s album cover casts him in a false light and is defamatory.

But Carney restricted Cappello’s direct-examination of the rapper after tense exchanges that included Cappello telling her, “Do you want to be here all afternoon? Let’s try to get through this. The jury is here for all of us, including you. So let’s respect everyone in the courtroom if we can.”

Trial resumed about 15 minutes later with Carney restricting Cappelo to 30 more minutes and directing Cardi to answer yes or no and explain further if necessary. Carney did not allow Cappello to ask Cardi any questions in a re-direct exam after she was cross-examined by her lead lawyer Lisa Moore of Moore Pequignot LLC in Atlanta, who handled the defamation trial.

Conlan said the judge’s decision amounted to “the denial of Plaintiff’s fundamental due process right to cross-examine Ms. Almanzar.”

Cardi’s lawyers have until Dec. 12 to file their opposition.