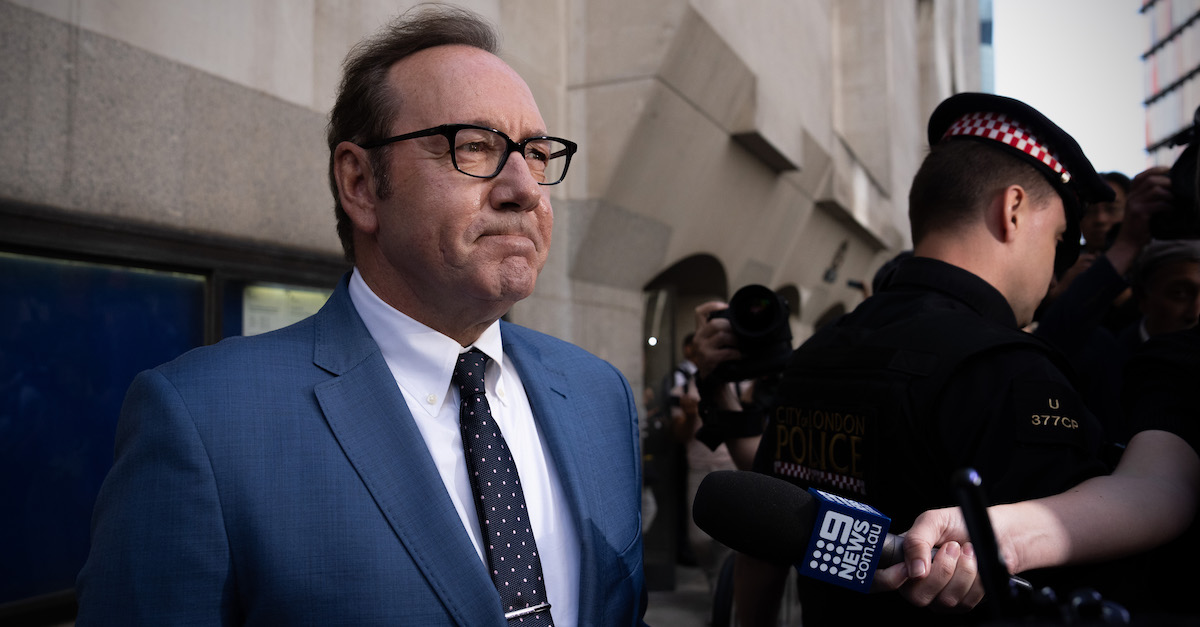 Lawyers for actor Kevin Spacey are trying to bar an expert who testified in Ghislaine Maxwell‘s criminal sex trafficking trial from testifying about the credibility of Spacey’s accuser in a civil sexual assault trial scheduled to begin next week.

A memorandum filed Monday in the Southern District of New York calls psychologist Lisa Rocchio‘s expected testimony “a thinly-veiled plan” to vouch for accuser Anthony Rapp‘s credibility under the guise of expert testimony. It also calls for Rocchio to be prohibited from testifying about what motivated Rapp to publicly accuse Spacey in 2017 and from opining about Spacey’s psychological state and whether she believes he assaulted Rapp.

“While Dr. Rocchio may be able to express her opinion of Plaintiff’s alleged psychological distress, her report and deposition testimony go far beyond that,” according to the motion-supporting memo, adding that the judge “already has recognized and emphasized that Plaintiff’s claims likely will rise or fall based on the jury’s determination of his credibility.”

“The jury – and the jury alone – is tasked with determining Plaintiff’s credibility and the accuracy of his account, and with evaluating the evidence presented at trial,” according to the motion, signed by Spacey’s lead lawyer, Jennifer Keller of Keller/Anderle LLP in Irvine, California.

Rapp’s lawyer Peter James Saghir in New York City could not be reached for comment Tuesday by Law&Crime.

The motion is among five Keller’s team has filed since Sept. 12 that seek to limit or exclude evidence and testimony Rapp’s attorneys expect to present during the trial, which is scheduled to begin Oct. 6 and last two weeks.

Rocchio is a clinical and forensic psychologist who also testified as an expert witness for the U.S. Attorney’s Office in Maxwell’s trial last December. She opined then not about specific accusers but about the grooming process sexual predators undertake to ensnare their victims.

In Spacey’s case, Rocchio evaluated Rapp “for a total of nine hours and thirty minutes over the course of three days,” according to a 22-page report that Keller’s team included with Monday’s motion. She also reviewed other materials such as text messages, his deposition, and BuzzFeed News articles about Spacey’s alleged assault of Rapp, which Rapp says occurred when he was 14 in 1986 and had been cast in the Broadway production Precious Sons in New York City.

Spacey, whose legal name is Kevin Spacey Fowler, would have been 26 or 27 at the time and was performing in the Broadway production of Long Day’s Journey into Night. Rapp says Spacey picked him up while they were at his apartment watching television, then pinned him to a bed in a sexual manner. His lawsuit seeks $40 million: $10 million for emotional pain and suffering and $30 million in punitive damages.

Spacey denies assaulting Rapp, and his lawyers have emphasized that Rapp has no evidence to corroborate his claims beyond his own testimony. Rapp also “admits the incident involved no groping, no touching of genitals, no undressing, no kissing, and no words of a sexual nature,” according to a trial brief filed Tuesday by Keller and her law partners Chase Scolnick and Jay Barron. Monday’s motion argues Rocchio’s assessment of his accusations “would invade the province of the jury” by trying to substitute Rocchio’s credibility assessment of Rapp in place of jurors’ assessments.

“Dr. Rocchio admitted she has no expert qualifications in determining whether an act of past sexual abuse actually occurred. She explicitly admitted it is not part of her role “as a treating therapist to determine whether someone’s claims of past sexual abuse are credible,” according to the memo, quoting Rocchio’s deposition.

Spacey’s other motions include one to prohibit Rapp’s lawyers from referencing other allegations against Spacey, including accusations from Justin Dawes and Andrew Holtzman, who both say Spacey sexually assaulted them in separate incidents in 1981. The filings do not discuss Spacey’s recent criminal charges in London, where he’s accused of assaulting three men in London and Gloucestershire between 2005 and 2013. Spacey pleaded not guilty to the charges in July, and the case is not expected to be mentioned in the civil trial.

U.S. District Judge Lewis A. Kaplan ruled Tuesday on several objections regarding depositions excerpts proposed for use in trial. Last month, the judge ordered journalist Adam Vary, who first reported Rapp’s allegations against Spacey in an Oct. 30, 2017 BuzzFeed article, to produce documents to Spacey’s lawyers and answer questions he refused to in deposition regarding “his interactions with Rapp and the reasons for some of his own actions.”

Now a writer with Variety, Vary referred to “a journalist shield law and First Amendment qualified journalist privilege,” but Kaplan said some material didn’t qualify, including a text exchange that “alludes to a negative interaction among Vary, Vary’s father, and Fowler at a restaurant prior to publication of the 2017 BuzzFeed story.”

The judge’s Aug. 9 opinion also mentioned communications with Vary and Rapp prior to Vary’s 2017 article that Kaplan said don’t suggest “a professional relationship or the prospect of future reporting on Rapp,” as well as messages between the men in 2021 about a documentary on Spacey that the judge said indicate Vary could be paid for his work on it. Vary said in his deposition that he’s known Rapp since 1999.

“To be sure, neither Vary’s credibility nor the accuracy of his reporting is a focus of this motion,” Kaplan wrote. “But whether Vary had a
motive to omit or change details to protect Rapp from later being contradicted about an inaccurate statement plainly is germane to Fowler’s defense here, particularly in light of the text messages already produced by Rapp.”

But Kaplan also said he had to credit “several instances in which Vary appears to have refused to depart from the editorial process for Rapp, including by refusing an overt request by Rapp to review a pre-publication draft of the story. He also said Vary doesn’t appear to have changed the story at Rapp’s request, nor did he circumvent his editors or seek “any special treatment for Rspp vis-a-vas Buzzfeed.”

The judge also said he found no “financial ties linking Vary and Rapp,” though Vary appears to have part from Rapp “courted compensation” for the documentary about Spacey.

Vary withheld the names of some of his confidential sources from documents submitted to the judge for review, though the judge noted that some still were identifiable. Still, the judge agreed confidential new gathering information, whether published or unpublished, shouldn’t be released. The little information he ordered released had been classified by Vary’s lawyer as not confidential.

In an email Tuesday to Law&Crime, Vary’s lawyer, Jean-Paul Jassy in Los Angeles, said Vary “fully protected his confidential sources” and has not turned over “any unpublished newsgathering information to Kevin Spacey.”

“Although we don’t agree with all aspects of the Court’s orders, we appreciate that the Court recognized that Mr. Vary acted as a professional journalist should, it rejected nearly all of what Spacey’s attorneys requested, and the Court did not order the disclosure of any privileged material,” Jassy said.

Keller, who also represents rapper Snoop Dogg in a sexual assault lawsuit, declined comment Tuesday. She discussed her defense of Spacey in a recent article in the legal publication the Los Angeles Daily Journal, saying she’s “looking forward to seeing him vindicated” and likening his situation to that of Johnny Depp before his case against Amber Heard went to trial.

“Everyone was burying Johnny Depp before the facts came out. I really think it’s time for Kevin to be heard,” Keller told the Daily Journal.

Read the full memo supporting the motion to limit Rocchio’s testimony below.