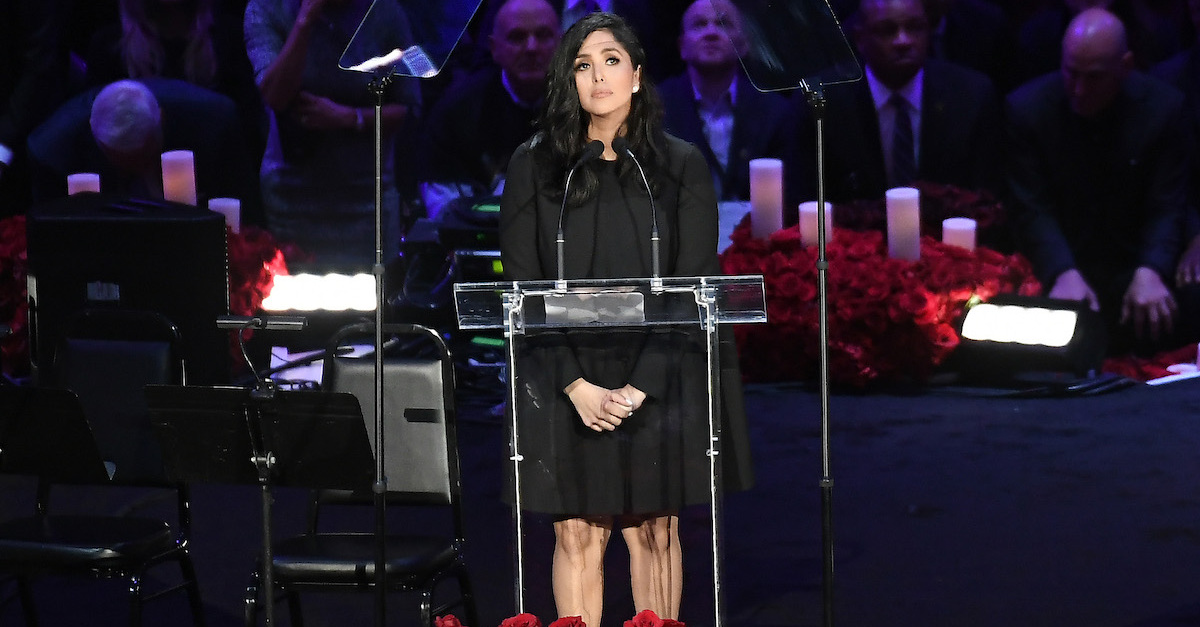 Vanessa Bryant speaks during The Celebration of Life for Kobe & Gianna Bryant at Staples Center on February 24, 2020 in Los Angeles, California. (Photo by Kevork Djansezian/Getty Images)

Lawyers representing Vanessa Bryant in her lawsuit against Los Angeles County won’t be allowed to show jurors taunting social media messages she received about Kobe Bryant’s death sent to her before it became public knowledge that sheriff’s deputies and firefighters had distributed graphic photos.

They will, however, be allowed to present messages she received afterward, including one that threatened to “leak Kobe’s body” and one that contained an aerial photo of the Jan. 26, 2020, helicopter crash that U.S. District Judge John F. Walter said can be inferred to be a county photo, one of several key rulings issued Friday ahead of next week’s trial.

Representing Bryant, lawyer Luis Li said the taunts and threats about the photos mean Bryant and her children “will have to have a very difficult relationship with the Internet for the rest of their lives.”

Representing LA County, lawyer Mira Hashmall said “the county is not liable for internet trolls” and the messages are “classic hearsay.”

But while Walter agreed that they are hearsay, he said the messages meet the legal standard for admission in trial because they won’t be presented to the jurors to accept as truth; rather, they will be presented to demonstrate Bryant’s state of mind when she read them.

One of the barred messages is “admittedly relevant as a taunt,” Walter said, but it also includes a doctored photo that clearly didn’t come from LA County and has “shock value that is obviously prejudicial.” However, Bryant’s lawyers can try to elicit testimony from her that she received the doctored photo, the judge said.

The judge announced the ruling during a three-hour hearing Friday at the federal courthouse in downtown Los Angeles during which he mostly rejected Los Angeles County lawyers’ attempts to bar experts hired by lawyers for Bryant and Christopher Chester, whose wife, Sarah George Chester, and daughter, Payton, were killed along with Bryant and his daughter Gianna. Basketball coach Christina Mauser, pilot Ara Zobayan, and John, Keri and Alyssa Altobelli also perished in the crash.

Bryant and Chester are suing the county, fire department, sheriff’s department and individual deputies and firefighters for distributing graphic photos of their family members’ remains, with claims for privacy violations, negligence and intentional infliction of emotional distress. Family members of Mauser and the Altobellis settled similar lawsuits in 2021 for $1.25 million apiece.

Under Walter’s new orders Friday, jurors won’t see disciplinary letters the Los Angeles County Fire Department sent some employees that describe the photos and the employee’s distribution of them.

Adam Bercovici, a retired Los Angeles Police Department lieutenant who now works as a law enforcement consultant, is allowed to take the stand, but his testimony will be limited to his experiences and expertise. He can discuss policies and practices at the Los Angeles County Sheriff’s Department, including the deletion of the photos, but he can’t opine about the legality or motives for doing so.

Bercovici’s experiences include efforts he made while working as a police supervisor to try to change the widespread practice of law enforcement keeping photos of gruesome deaths as souvenirs, which is a key reason Bryant and Chester’s lawyers want him to testify. So he’s expected to testify about his efforts in that area. Walter said Friday he can discuss practices and policies within the Sheriff’s Department, but he can’t opine that Sheriff Alex Villanueva’s direction for deputies to delete the photos “sent a signal to law enforcement” that the sharing of death scene photos won’t be punished.

Walter mostly rejected LA County’s request to eliminate or restrict the testimony of David Freskos, a digital forensics consultant and managing director of FTI Consulting in Chicago. Freskos won’t be allowed to testify that the Los Angeles County Sheriff’s Department had a legal duty to preserve evidence, but Walter said his testimony about fundamental principals of digital evidence will help jurors better understand the case.

The judge’s ruling about the taunting messages to Bryant also addressed LA County’s request to prohibit testimony from a man who was at a bar in Norwalk when Deputy Joey Cruz, who is a defendant in the case, showed photos of human remains from the crash to the bartender, who then described the photos to the other man.

Bryant’s lawyers argued the man, who complained to the sheriff’s department about the incident, should be allowed to testify about what the bartender said because while it’s hearsay, the bartender made the comments as a so-called excited utterance, which is another legal exception to hearsay. But Walter won’t allow it, saying though the bartender was excited, his comments didn’t meet the legal definition of excited utterance.

But the judge is allowing other hearsay testimony about key comments, including from a plaintiff’s witness who heard law enforcement officials talking about photos of Kobe’s body during cocktail hour at a gala not long after the crash. That includes testimony about hearing one official say, “I just saw pictures of Kobe all burnt up before I’m about to eat” and another who said, “Oh, don’t you guys want to see the Kobe pictures.”

The judge rejected LA County’s motion to bar the admission of videos of statements Sheriff Villanueva made to reporters after the crash, but he barred Bryant and Chester’s lawyers from admitting as evidence disciplinary letters that were issued over the photos.

Walter also made clear when asked by Hashmall that lawyers for both Bryant and Chester will be allowed to question every witness.

Li, a partner with Wilson Sonsini Goodrich & Rosati, said he and Chester’s lawyer, Jerome Jackson, are working closely together and will ensure their exams don’t repeat questions. Li said Friday that Bryant’s grief is equal to Chester’s.

“I want to make clear, this is not just about Mrs. Bryant,” Li said. “Chris Chester has suffered just as much as she has.”

At the end of the hearing, Hashmall took issue with Li’s comments about Bryant’s children and emphasized that the only people claiming emotional distress are Bryant and Chester, not their children.

“I’m very concerned that they plan to being the children to court,” said Hashmall, a partner with Miller Barondess LLP. “I don’t want the jury to be looking at those children and be impacted.”

“Well, they have a right to be in the courtroom. It’s a public courtroom,” Walter replied.

Jury selection begins Wednesday at 8:30 a.m. Depending on how that goes, opening statements could be in the afternoon. According to the most recent witness list, the first person expected to testify is Rob Pelinka, the general manager of the Los Angeles Lakers who was with Vanessa during the immediate aftermath of the crash.

Editor’s note: This article has been updated to reflect that Judge Walter rejected the county’s bid to bar video statements from the sheriff and to better describe the nuances of other decisions.