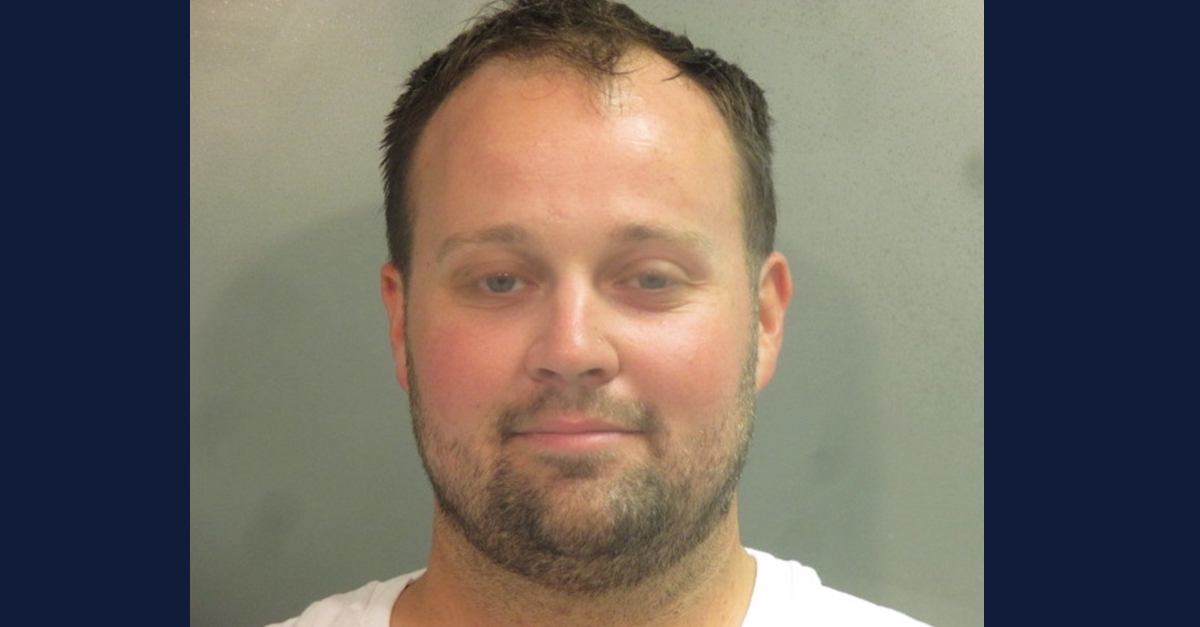 A federal judge in Arkansas has denied requests for either a new trial or a judgment of acquittal by former conservative political activist and 19 Kids and Counting television star Josh Duggar. The judge’s opinion and order methodically rejected claims that Duggar never viewed child pornography and that an alternate suspect could have been behind the material uncovered on Duggar’s workplace computer.

A jury in the Western District of Arkansas convicted Duggar on Dec. 9, 2021, on one count each of receiving child pornography and possessing child pornography.  Though U.S. District Judge Timothy L. Brooks, a Barack Obama appointee, threw out Duggar’s attempts to flip the conviction, the judge did agree with an important stipulation between the government and the defendant: possession is a lesser offense included within the definition of (and the penalty established for) the receipt of child pornography. That means Duggar will only face punishment for receipt and not possession when he is sentenced this week.

“[I]t is the Court’s intention to vacate the jury’s conviction for the possession offense and formally dismiss Count 2 during the sentencing hearing,” Judge Brooks wrote.

Duggar therefore faces up to a maximum of 20 years in federal prison — which is what federal prosecutors are seeking.

Duggar’s recent legal moves were based on Rules 29(a) and 33(a) of the Federal Rules of Criminal Procedure. Rule 29(a) and related Eighth Circuit case law allow a judge to jettison a jury verdict and instead order an acquittal if “no reasonable jury could have found the defendant guilty beyond a reasonable doubt.” Rule 33(a) allows a judge to “vacate any judgment and grant a new trial if the interest of justice so requires.”

Judge Brooks noted that the standards under both rules are deferential to the government, not the defendant. Judge Brooks, while quoting the relevant case law, reminded Duggar that “motions for new trials based on the weight of the evidence generally are disfavored, and the district court’s authority to grant a new trial should rarely be exercised.” And, while considering throwing out a guilty verdict, a judge is legally bound to resolve contested evidence in favor of the government — since that’s what the jury did.

The rules are designed as judicial stop-gaps against wholly bizarre jury verdicts or other spectacular government failures during trials. It is rare that they are granted, and when they are, appeals courts are known to reverse them. Defense attorneys routinely employ the rules via oral motions outside the presence of a jury after the government concludes its case-in-chief and after all testimony has concluded.

Duggar unsuccessfully argued under Rule 29 that the jury didn’t have enough evidence to conclude that he had the necessary mens rea — or guilty mental state — based on the evidence produced at trial. He also claimed under Rule 33 that the government failed to disclose evidence in a timely fashion and balked at the judge’s rulings about certain witness testimony.

The judge recapped the defendant’s arguments as follows (citations to the record are omitted):

The judge responded, in part, by pointing to specific pieces of evidence presented (again, we’ve omitted the cluttersome citations to the record and specific filenames):

Mr. Duggar’s argument lacks merit, as there is ample evidence he viewed the images of child pornography that had been downloaded to his business computer. The Government’s first witness, Detective Amber Kalmer, testified that on May 14, 2019, she established an online, peer-to-peer connection with a computer associated with an IP address located in Northwest Arkansas. This IP address shared a video on the peer-to-peer network, and Detective Kalmer downloaded it. The two- or three-minute video . . . depicted an adult male vaginally penetrating two prepubescent girls. The following day, May 15, Detective Kalmer made a connection with the same IP address and downloaded another file . . . . This file contained 65 still images of a prepubescent girl posing nude and displaying her genitals for the camera. The final frames of [the file] showed the same girl being locked in a dog kennel.

Both [files] were introduced into evidence at Mr. Duggar’s trial and published to the jury. Detective Kalmer testified that she reported the illegal downloading activity to the Department of Homeland Security’s office in Northwest Arkansas. HSI Special Agent Gerald Faulkner was tasked with following up on Detective Kalmer’s lead. He discovered that the target IP address was registered to Joshua James Duggar at his business, Wholesale Motorcars, in Springdale, Arkansas. Federal agents executed a search warrant on the business and seized Mr. Duggar’s HP desktop computer for forensic analysis.

The judge then noted that Duggar’s computer was “partitioned” into two separate systems. One side of the system contained Duggar’s business affairs and “accountability” software known as “Covenant Eyes.” This side of the system was set up to report pornography views or downloads to an “accountability partner” who, here, was Anna Duggar — the defendant’s wife. The other side of the computer contained a Linux-based system that contained child pornography, the judge said. The Linux side bypassed the “Covenant Eyes” software. 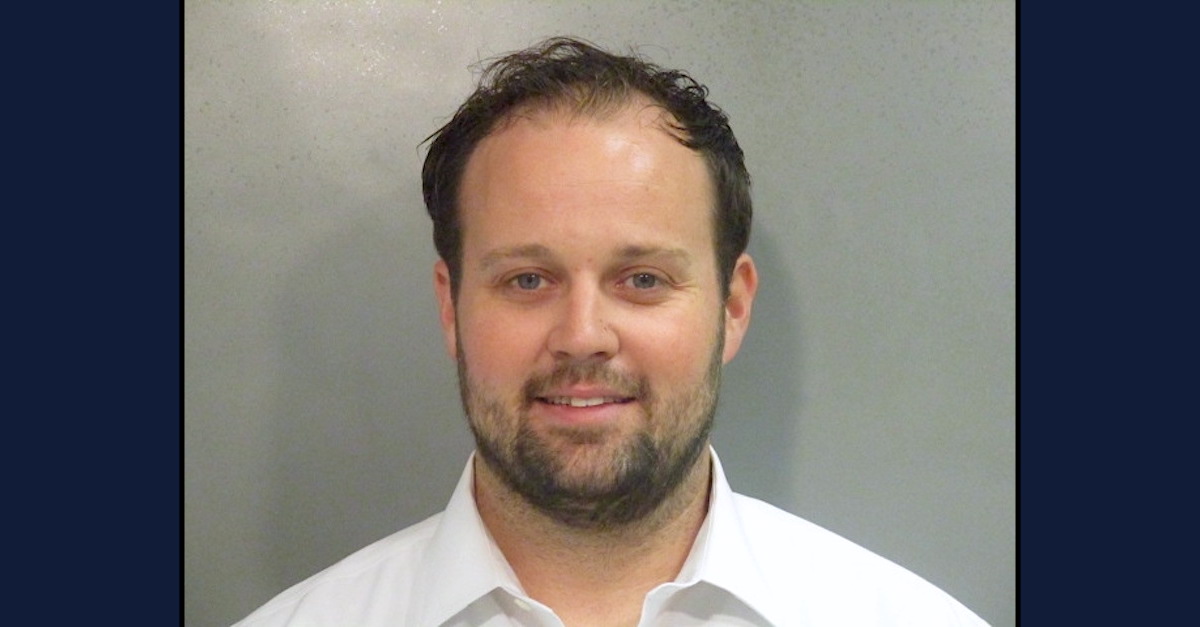 Josh Duggar appears in a post-conviction mugshot taken by the Washington County, Arkansas jail on Dec. 9, 2021.

The judge further recapped expert witnesses who testified that “the computer’s user actually viewed the downloaded images of child pornography” based on the fact that at least one of the files was “unzipped” by someone who was actually using the computer, “placed in a folder on the desktop,” and “opened in image viewer all at the exact same time and second.”

“Thus, viewed in the light most favorable to the jury’s verdicts, there is a reasonable inference that Mr. Duggar is the user who installed and used the Linux partition for the purpose of searching and viewing internet content that would otherwise have been reported to his wife by Covenant Eyes,” the judge wrote.

“The coup de grâce is Government’s Exhibit 85,” the judge continued. “This exhibit, introduced through Mr. Fottrell’s testimony, is a timeline summarizing 50 or 60 exhibits of forensic evidence recovered from Mr. Duggar’s HP desktop, iPhone 11, iPhone 8, and MacBook. The evidence summarized in Exhibit 85 places Mr. Duggar at the car lot on May 13, 2019, during the local installation of the Linux partition and operating system, and during May 14–16, 2019, at the times child pornography was downloaded.”

“Based on the Court’s discussion of the trial evidence above, there is no merit to Mr. Duggar’s argument in favor of acquittal,” the judge rationed. “There was significant evidence presented at trial to convince a reasonable jury that Mr. Duggar was physically present during the offense conduct and that he had the mens rea to commit these crimes.”

The judge thus dispatched Duggar’s Rule 29(a) request to throw out the verdict completely and render a judgment of acquittal in its place.

While contemplating whether a new trial was warranted, the judge said that “the evidence at trial showed that Mr. Duggar — and only Mr. Duggar — was physically present at the car lot when child pornography was being downloaded.”

In a footnote, the judge shot down defense suggestions that another perpetrator — including one named by the defense — was responsible for the pornography by noting the dearth of evidence to back up that assumption.  Again, legal citations are committed:

The defense’s theory of an alternative perpetrator did come with a potential twist: that someone may have remotely accessed the desktop from a different physical location and downloaded child pornography that way. To support this theory, the defense asked the computer experts whether it was theoretically possible for someone to have remotely accessed the desktop; or, said another way, they asked whether the experts could “rule out remote access.” The defense also pointed out that the password to the Linux partition was one that Mr. Duggar commonly used for online banking and other online applications, so a remote hacker might have known the password or been able to figure it out. Unfortunately for the defense, there was no forensic evidence to indicate the Linux side of the hard drive was ever remotely accessed — by anyone.

The judge said the potential alternate suspect proffered by the defense — former car lot employee Caleb Williams — was only at Duggar’s car lot “from May 8 to May 11, 2019, several days before any child pornography downloads took place.” (The downloads occurred May 14, 15, and 16, and Williams was in Illinois between May 11 and May 16.) The judge said the government properly turned information concerning Williams over to the defense — albeit late in the process — and that the defense successfully cross-examined witnesses about Williams during the trial. The defense didn’t call Williams even though it had the chance to do so, the judge further noted, and that was likely because Duggar’s own expert witness testified that “someone who was physically present at the car lot on May 13 installed the Linux operating system by inserting a thumb drive into the HP desktop computer.” That’s when Williams was out of state. According to the judge, though Williams had been convicted of a past sex offense — something the defense seemed desperate to get before the jury — the timeline effectively exculpated him as a viable suspect.

“In the end,” the judge wrote, “the defense’s promise of an alternative perpetrator came to nothing.”

[Editor’s note: this report has been updated to clarify Duggar’s maximum possible sentence.]