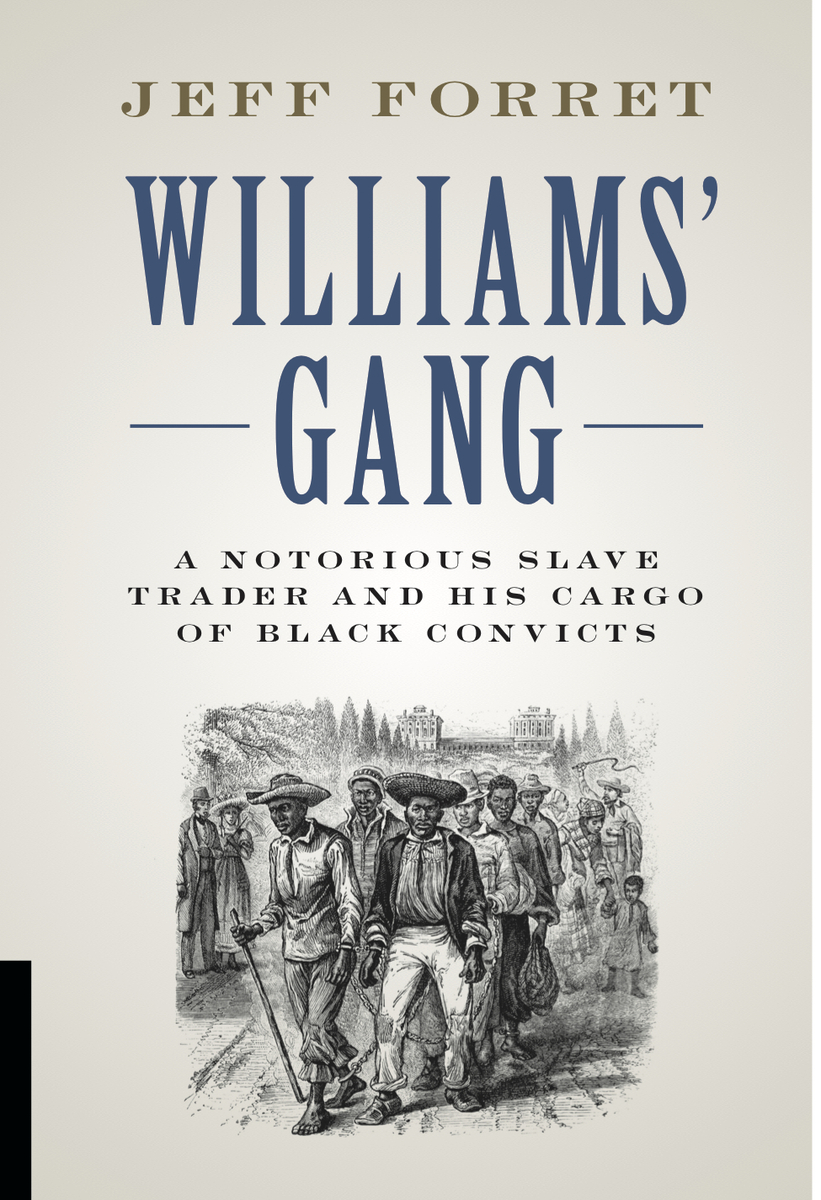 Williams’ Gang is a detailed and vivid chronicle with a profound message that is equally difficult and important to face: America endorsed human bondage at every level of law and government. Unlike so many works on the topic of American slavery, Williams’ Gang focuses not on the personal narratives of those enslaved, but rather on some of the powerful men and structured systems that made slavery possible. One such man was domestic slaver William H. Williams, who purchased 27 convicts from the Virginia State Penitentiary, ostensibly to sell to the then-foreign country of Texas. Williams’ decades of brutal human trafficking, his many related courtroom escapades, and his illegal transportation of slaves into New Orleans coalesce to reveal the story of a figure that–until now–was largely left behind by history.

It is an important read for anyone interested in learning how an entire race of people was systematically dehumanized.

Forret introduces his readers to the shocking and heartbreaking world of southern slave law–from legislation governing the economies of trade to the process for trying slave criminal cases, to the severe and brutal punishment sanctioned by the states. In the antebellum South, even free blacks were easily incarcerated and forced to face everything from execution to human trafficking, regardless of the magnitude–or veracity–of their perceived infractions.

The book is woven through with explanations of the many economic regulations supporting the domestic slave trade; even after the Middle Passage was closed, slave trade within the U.S. flourished. And the legal infrastructure sent a clear message: human beings were a commodity ripe for speculation, ready to be exploited for profit.

Moreover, Forret delves into differences between the southern states at a time when Texas was a foreign country and federalism was still in its infancy. While Williams’ Gang explores two-centuries-old history, its messages are highly relevant in 2020, as we continue to grapple with racism, criminal justice reform, human rights laws, and tensions between states.

Law&Crime spoke with Forret, who explained that “Certainly the legal structure was in place to support the slave regime, but at the same time, there were contradictions present within it.” Given the complexity of laws needed to trade and keep slaves, statutes of two slave states would sometimes collide, he said.

“For example, when Virginia governors reprieved enslaved convicts to sale and transportation outside the United States, they were technically promoting an international slave trade, which U.S. law made illegal starting in 1808,” Forret said. “All of this underscores the importance of state law to the functioning of the slave system.”

Forret described Williams’ Gang as a work written out of “pure curiosity.” After finding references to the enslaved convicts of Williams’ Gang in the penitentiary records of two different states, Forret was determined to uncover their story.

“I had no idea going into the project the kinds of issues that would surface–issues still relevant in our own time, as it turned out,” he said.

Williams’ Gang is out now, and available through Amazon.