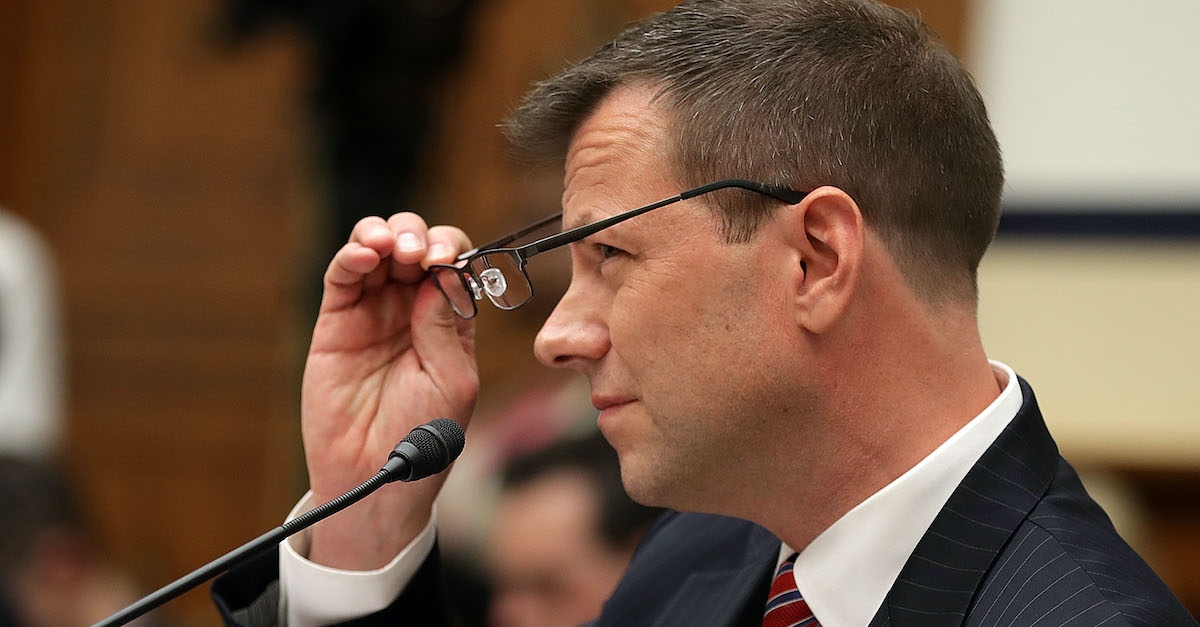 Fired FBI counterintelligence agent Peter Strzok, like many others, was clearly listening to the various explosive moments from a court hearing in the ongoing Michael Flynn case. Strzok said that a DOJ lawyer lied during the hearing about what his infamous “insurance policy” text to fired FBI lawyer Lisa Page actually meant.

For Kohl to state I "felt I was an insurance policy" is entirely incorrect. If the Government was unable to review my sworn testimony, they could have interviewed me (or anyone else from the leadership of the team) about it.

“Right now, Ken Kohl of the DC US Attorney’s office is before Judge Sullivan materially misrepresenting my statements, specifically my analogy of an insurance policy. I have stated repeatedly, under oath, that it was analogy of how to balance investigation against source safety,” Strzok said on Twitter. “For Kohl to state I ‘felt I was an insurance policy’ is entirely incorrect. If the Government was unable to review my sworn testimony, they could have interviewed me (or anyone else from the leadership of the team) about it.”

“I want to believe the path you threw out for consideration in Andy’s office — that there’s no way he gets elected — but I’m afraid we can’t take that risk. It’s like an insurance policy in the unlikely event you die before 40,” the text said.

The text exchanges have been cited by Trump’s supporters ever since as proof that Strzok and Page were key participants in the Russia investigation—namely, a deep state “insurance policy” coup against a duly elected president. The Flynn case is set against this backdrop. Strzok and Page worked on the Flynn probe, dubbed Crossfire Razor.

Page has said that the “we” in those text messages was not referring to the FBI.

“By ‘we,’ [Strzok’s] talking about the collective we: like-minded, thoughtful, sensible people who were not going to vote this person into office. You know, obviously, in retrospect, do I wish he hadn’t sent it? Yes. It’s been mutilated to death, and it’s been used to bludgeon an institution I love, and it’s meant that I’ve disappointed countless people,” Page said. “But this is a snapshot in time carrying on a conversation that had happened earlier in the day that reflected a broad sense of, ‘He’s not going to be president.’ We, the democratic people of this country, are not going to let it happen.”

[W]e had sort of quite regular conversations about trying to balance getting the answer as quickly as possible, right, because if the answer is this is a guy just being puffery at a meeting with other people, great, then we don’t need to worry about this, and we can all move on with our lives. If this is, in fact, the Russians have co-opted an individual with, you know, maybe wittingly or unwittingly, that’s incredibly grave, and we need to know that as quickly as possible.

Strzok said when under oath before Congress that he was concerned about compromising a source:

I think the most aggressive course of action would be to go out and, you know, simply do very overt things, start talking to people and interviewing people. The trouble with that is — there are many problems with that. One, people don’t frequently tell you the truth when you talk to them. A lot of things that you might find by doing some background information will allow you to conduct a far more effective interview, and certainly going out and doing that, people are immediately going to be aware that somebody told the FBI the nature of this predicating information, which would be a considerable harm and cost potentially to that source.

[M]y recollection from the text — was part of a discussion that we had in the context of having received information from an extremely sensitive source and that the debate — one of the debates on how to pursue this information was how much risk to put that sensitive source in because, in my experience, the more aggressive an investigation, the greater chance of burning or compromising that source.