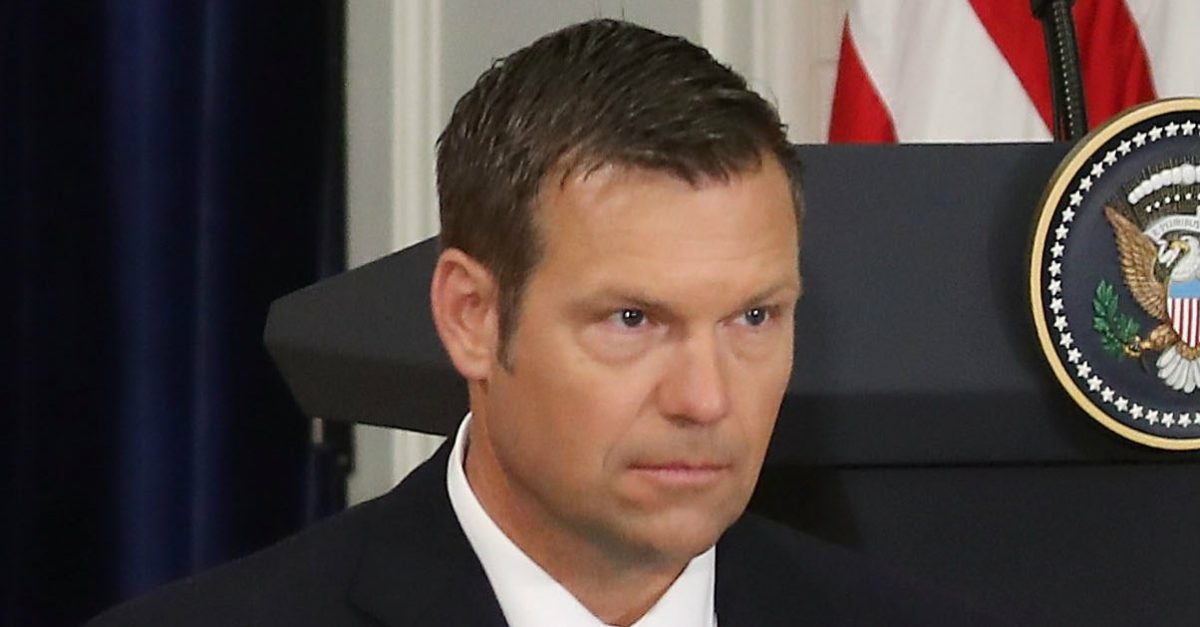 Kansas Secretary of State Kris Kobach has been ordered to take six hours of continuing legal education classes by a federal judge due to his apparent lack of familiarity with the law. He also lost his case; overturning Kansas’ strict voter registration law.

In a scathing decision issued by U.S. District Judge Julie Robinson, Kobach’s various courtroom foibles were aired for all to see.

Remarking upon Kobach’s evidentiary woes, Robinson noted in her lengthy 118-page opinion, “The disclosure violations. . . document a pattern and practice by [Kobach] of flaunting disclosure and discovery rules that are designed to prevent prejudice and surprise at trial. The Court ruled on each disclosure issue as it arose, but given the repeated instances involved, and the fact that Defendant resisted the Court’s rulings by continuing to try to introduce such evidence after exclusion, the Court finds that further sanctions are appropriate.”

In plain English, that means Kobach wasn’t following the rules, and kept trying to break them when the court pushed back.

It is not clear to the Court whether [Kobach] repeatedly failed to meet his disclosure obligations intentionally or due to his unfamiliarity with the federal rules. Therefore, the Court finds that an additional sanction is appropriate in the form of Continuing Legal Education. [Kobach] chose to represent his own office in this matter, and as such, had a duty to familiarize himself with the governing rules of procedure, and to ensure as the lead attorney on this case that his discovery obligations were satisfied despite his many duties as a busy public servant. The Court therefore imposes a CLE requirement of 6 hours for the 2018-2019 reporting year in addition to any other CLE education required by his law license. These 6 additional hours must pertain to federal or Kansas civil rules of procedure or evidence.

Attorneys generally have to take certain number of CLE hours in order to comply with licensing requirements. The judge here said this isn’t enough for Kobach, who will have to take six more hours of classes that specifically have to do with the state’s rules for evidence or civil procedure.

Kobach has been representing his own office in a lawsuit brought by the American Civil Liberties Union against Kansas’ harsh voter registration law. The ACLU sued on behalf of disenfranchised Kansas voters and more or less won every step of the way. During this time, however, Kobach suffered one humiliating and self-inflicted blow after another.

First, Kobach and his team were admonished for not understanding how the federal rules of evidence worked after they attempted to sneak in a document without giving opposing counsel sufficient heads up. Then, Kobach lost an expert witness after another evidentiary flub-up. After that, Team Kobach mistakenly filed a draft of a brief that included a note that one particular claim was “probably not worth arguing.”

The court finds no credible evidence that a substantial number of noncitizens registered to vote … Instead, the law has acted as a deterrent to registration and voting for substantially more eligible Kansans than it has prevented ineligible voters from registering to vote.

Robinson also dinged Kobach for relying on putative expert witnesses whose opinions were based on “preconceived beliefs about [voter fraud],” “misleading evidence,” and “numerous methodological flaws.” In the end, the credibility of Kobach’s entire case was rubbished because the court was unable to find any evidence of “intentional [voter] fraud” in the Sunflower State during the time period alleged.

Kobach received his J.D. from Yale Law School and previously taught law at the University of Missouri-Kansas City.