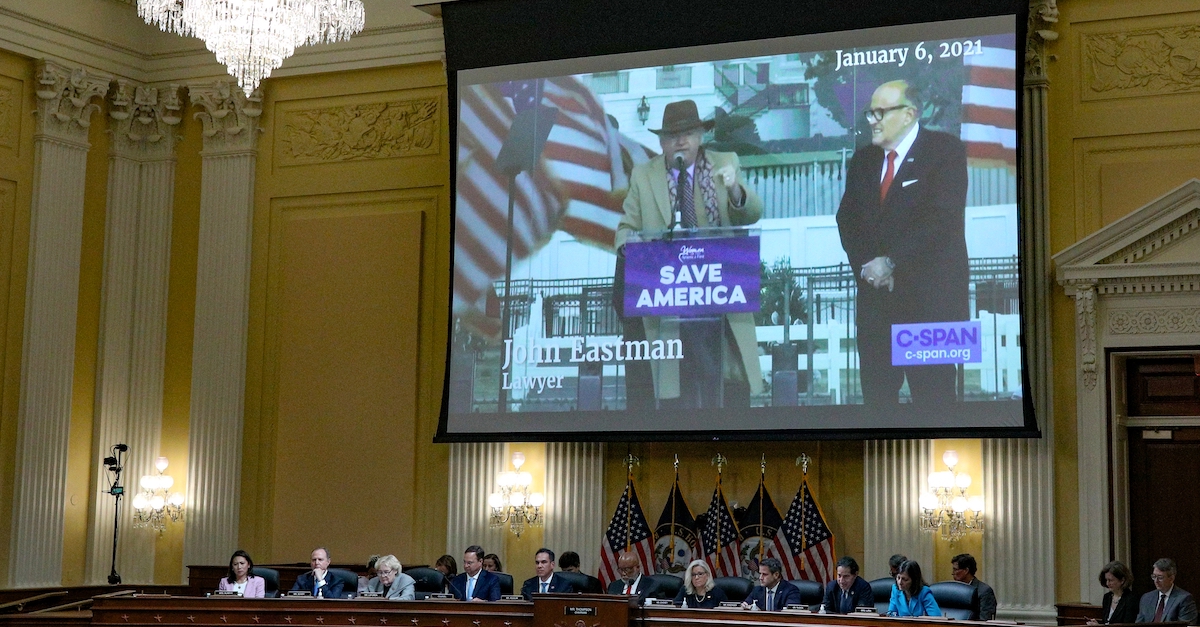 An image of John Eastman and Rudy Giuliani is displayed on a screen during the third hearing held by the Select Committee to Investigate the January 6th Attack on the U.S. Capitol on June 16, 2022 in the Cannon House Office Building in Washington, DC.

“We were not aware that the links in Dr. Eastman’s email remained active, and had no intention to provide this type of public access to the materials at this stage,” according to the letter signed by Douglas Letter, general counsel for the U.S. House of Representatives. “Providing public access to this material at this point was purely inadvertent on our part.”

“Providing public access to this material at this point was purely inadvertent on our part.” pic.twitter.com/bev8jpnReB

The link is no longer active, but the emails are now widely available through new agencies that have published extensive coverage of their contents, with much of it focused on comments Eastman and Kenneth Chesebro made about U.S. Supreme Court Justice Clarence Thomas.

Eastman asked the 9th Circuit late Wednesday to dismiss his appeal and vacate Carter’s order, saying it’s needed “to ensure fairness to the party that is unable, through no fault of its own, to secure appellate review of an adverse decision.” The 12-page filing from attorney Anthony T. Caso said the committee refused to honor their request not to review the emails in the Dropbox link “later falsely asserting that it did so because no motion to stay was pending at the time.”

Caso says case law supports vacating the order out of fairness, particularly because of the significance of Carter’s crime-fraud findings.

“A ‘crime-fraud’ privilege finding carries much of the stigma of a criminal conviction with none of the constitutional protections,” he wrote.”In this particular case, Judge Carter’s order compelling production of privileged documents under a crime-fraud exception threatens significant harm both to Appellant and to his former client.”

The brief says Carter’s finding “is clearly erroneous in light of the context in which the supposed ‘crime-fraud’ communications occurred.”

“Leaving that decision in place without Plaintiff-Appellant having the opportunity to challenge it on appeal is precisely the reason the Supreme Court has directed vacatur in circumstances such as this,” according to the brief, which cites the 1950 U.S. Supreme Court ruling in United States v. Munsingwear, Inc. and progeny.

Carter’s Oct. 19 order expanded on previous orders that said Eastman and Trump “more likely than not” attempted to obstruct election proceedings and defraud the United States, with 10 emails now declared to have been written in furtherance of those crimes.

The last order made a big splash because of the judge’s determination that Trump knowingly pushed false information about voter fraud in Fulton County, Georgia, to the public and in a federal court filing he signed even after he was told the information was false.