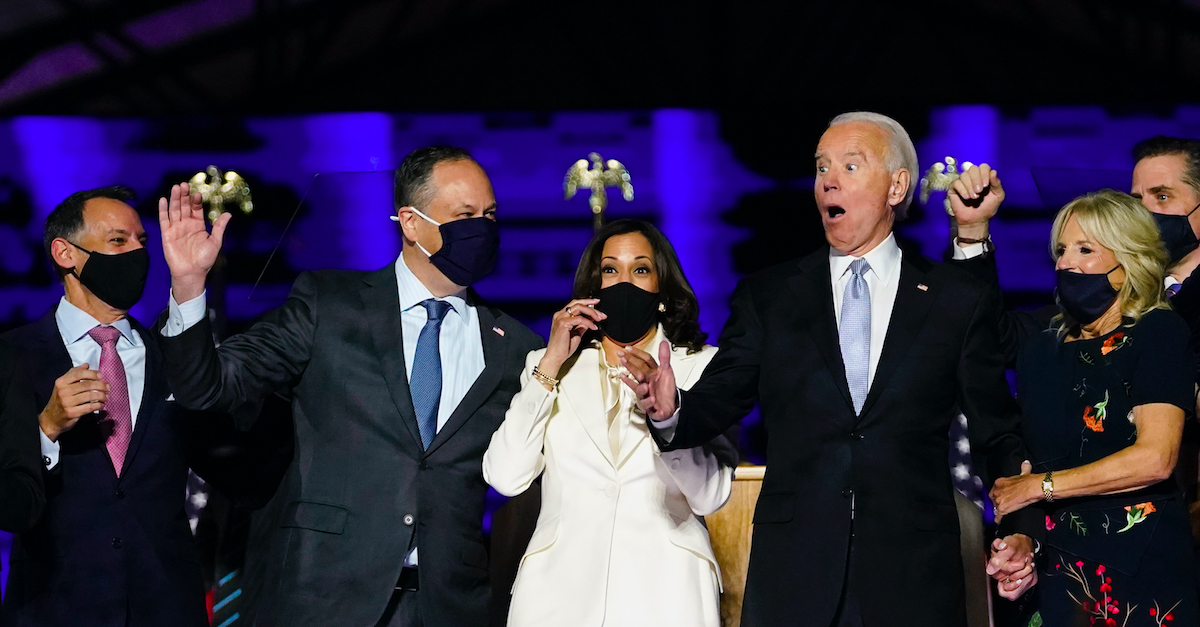 President-elect Joe Biden and Vice President-elect Kamala Harris, stand with their spouses, Dr. Jill Biden and Douglas Emhoff, after addressing the nation the evening they were declared the winners on Nov. 7.

The Electoral College on Monday formally selected Joe Biden as the 46th President of the United States, as the electors resisted pressure and open but empty threats of prosecution from outgoing President Donald Trump, who has continued to lie that he won the 2020 election.

California casting all 55 of the state’s votes to Biden and Vice President-elect Kamala Harris tipped the upcoming administration over the 270-vote threshold, capping off an electoral process typically viewed as a formality but thrown into turmoil by the ruling party’s desperate and flailing attempts to cling to power.

In the days leading up to Monday’s vote, President Trump ratcheted up his campaign to discredit the election process, the U.S. Supreme Court, and officials in several of the states where he lost the popular vote with increasingly desperate conspiracy theories untethered to reality. More than two-thirds of the House GOP, state-level Republicans, and a stunning number of conservative attorneys general supported the president’s assault on the U.S. democratic process—in legal briefs and fundraising drives. None of the party’s leadership objected to this offensive, and nearly all participated in it.

“Swing States that have found massive VOTER FRAUD, which is all of them, CANNOT LEGALLY CERTIFY these votes as complete & correct without committing a severely punishable crime,” the outgoing president falsely asserted on Sunday evening, in a tweet viewed by many as a veiled threat to electors who followed the law. “Everybody knows that dead people, below age people, illegal immigrants, fake signatures, prisoners and many others voted illegally.”

Trump retweeted those threats and falsehoods on Monday before the electors voted. No state or federal court across the country found any of those wild tales to be true, including more than half a dozen of Trump’s appointees. One federal judge in Wisconsin appointed by Trump heard his allegations on the merits before shredding them.

“Also, machine ‘glitches’ (another word for FRAUD), ballot harvesting, non-resident voters, fake ballots, ‘stuffing the ballot box’, votes for pay, roughed up Republican Poll Watchers, and sometimes even more votes than people voting, took place in Detroit, Philadelphia, Milwaukee, Atlanta, Pittsburgh, and elsewhere,” Trump said on Twitter. “In all Swing State cases, there are far more votes than are necessary to win the State, and the Election itself. Therefore, VOTES CANNOT BE CERTIFIED. THIS ELECTION IS UNDER PROTEST!”

Swing States that have found massive VOTER FRAUD, which is all of them, CANNOT LEGALLY CERTIFY these votes as complete & correct without committing a severely punishable crime. Everybody knows that dead people, below age people, illegal immigrants, fake signatures, prisoners,….

….place in Detroit, Philadelphia, Milwaukee, Atlanta, Pittsburgh, and elsewhere. In all Swing State cases, there are far more votes than are necessary to win the State, and the Election itself. Therefore, VOTES CANNOT BE CERTIFIED. THIS ELECTION IS UNDER PROTEST!

But as U.S. Attorney General Bill Barr recently reiterated, there has been no evidence of widespread voter fraud taking place in any state. The former head of the U.S. Department of Cybersecurity and Infrastructure has also stated that the 2020 election was the “most secure in American history.”

After blaming Republican elected officials for allowing Democrats to “cheat” in their states, Trump took aim at the high court, expressing his dissatisfaction that the justices last week rejected a frivolous challenge to the election results filed by Texas Attorney General Ken Paxton (R), whose meritless effort to overturn the election in four other states was widely viewed as an attempt to win a presidential pardon amid a federal bribery investigation.

“The fact that the Supreme Court wouldn’t find standing in an original jurisdiction matter between multiple states, and including the President of the States, is absurd. It is enumerated in the Constitution… They just ‘chickened out’ and didn’t want to rule on the merits of the case. So bad for our Country!” the president continued.

…They just “chickened out” and didn’t want to rule on the merits of the case. So bad for our Country!

Justices Clarence Thomas and Samuel Alito agreed they would have heard the Texas action but added they would “not grant other relief.” Numerous state and federal courts have heard cases brought by Trump and his allies, rejecting each in turn.

Biden and Harris received 81 million votes in 2020, a record for a presidential ticket, as runoff elections in Georgia call into question whether a recalcitrant Senate still in Trump’s thrall will try to sabotage an incoming administration whose legitimacy the Republican party has baselessly attacked.