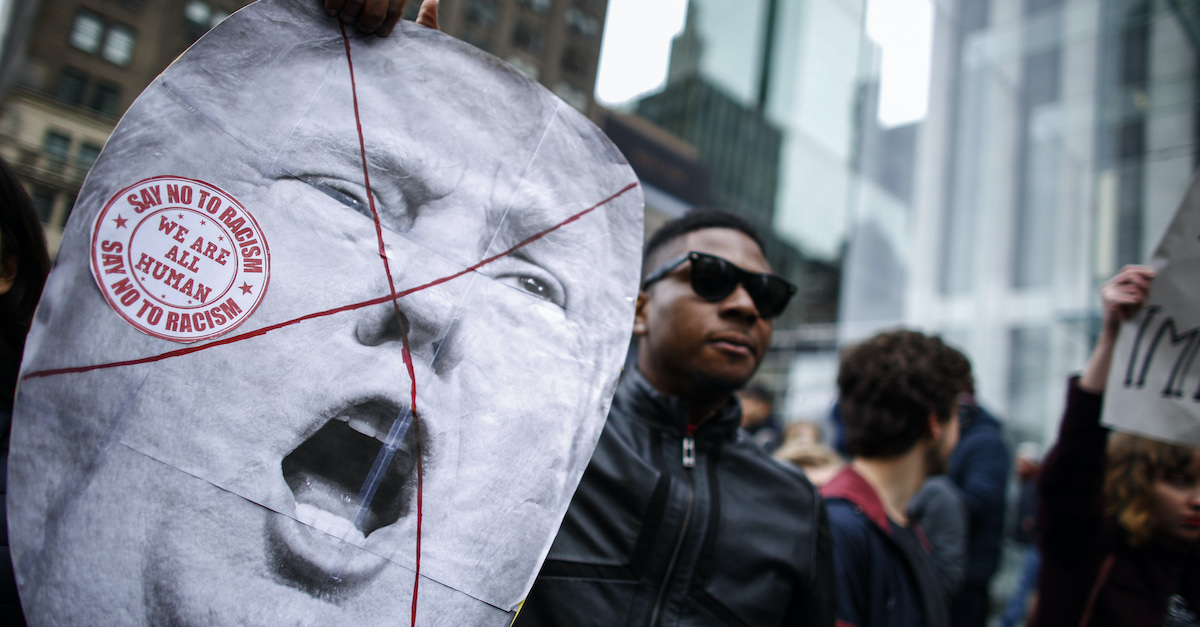 A man holds a sign as he takes part in a protest against then-Republican presidential front-runner Donald Trump in New York on March 19, 2016.

Black Pennsylvania residents crucially rebuilt the “blue wall” that carried President-elect Joe Biden across the 270 electoral vote threshold in victory over his soon-to-be predecessor Donald Trump. Now, civil rights groups and Black voters want to intervene in a lawsuit, which the Trump campaign controversially filed Monday in an attempt to block Pennsylvanians’ votes from being certified.

“Plaintiffs have launched an all-out attack on voting by mail-in and absentee ballot,” the NAACP’s Pennsylvania State Conference wrote along with three other rights groups and eight voters in a 28-page brief filed on Tuesday. “They have done so, unapologetically, in the midst of a global pandemic. The relief plaintiffs seek from this court is unprecedented, unsupported and unsupportable: They want to stop Pennsylvania from certifying the results of the 2020 General Election.”

“This flagrant attempt to disenfranchise hundreds of thousands of Pennsylvania voters must be rejected,” the NAACP and its allies said in the last line of their first paragraph.

The Trump campaign’s lawsuit on Monday was the latest salvo in their flailing legal blitz to reverse the outcome of an election that rendered President Trump a one-term, impeached president. Previous efforts in Georgia, Michigan, Nevada and elsewhere have failed, but never before has his campaign asked for such a sweeping court order, effectively de-legitimizing election results on the basis of vanishingly thin evidence.

For all of the campaign’s scaremongering on voter fraud, Trump points to only two specific examples of it: a handful of anecdotal allegations in Fayette and Luzerne, counties that he won by double-digits. He did not sue those counties, instead focusing his fire on seven county boards of elections that leaned heavily for his opponent.

Young and old, the voters who wanted to make their voices heard in this lawsuit are Joseph Ayeni, Lucia Gajda, Stephanie Higgins, Meril Lara, Ricardo Morales, Natalie Price, Tim Stevens and Taylor Stover, who opted for absentee or mail-in ballots for a variety of reasons ranging from illness to pregnancy.

“Ms. Gadja was exceedingly proud to cast her vote and would lose faith in our democracy if her vote were not counted and she is robbed of her ability to express her views and hold elected officials accountable through no fault of her own,” their motion states.

Stevens, a 75 year old Black man, belongs to two constituents that made him fear in-person voting.

“Besides his age, which puts him at elevated risk of serious illness and death if he contracts the coronavirus, Mr. Stevens has seen reporting about how the disease disproportionately impacts Black people and people of color,” it continues. “For these reasons, he did not feel safe voting as he usually does at the poling place.”

They are backed by civil rights groups Black Political Empowerment Project, Common Cause Pennsylvania, and the League of Women Voters of Pennsylvania.

Read the NAACP—Pennsylvania State Conference’s motion to intervene below: